Brampton city council voted to ask Uber to suspend UberX (ridesharing in private vehicles) operations in the city. With a full public gallery comprised mostly of taxi drivers and representatives, councillors voted unanimously in favour of the motion.

The motion addressed concerns over UberX service, such as criminal background checks, adequate insurance, and vehicle safety checks. It was also revealed that the city earns about $500,000 from the taxi industry annually through licensing fees. 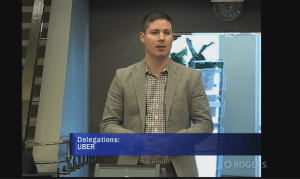 Chris Schafer, Uber’s Manager of Public Policy, Canada, was the only delegation to council to speak in favour of Uber. Schafer said Uber is welcome to smart regulations. Schafer noted Edmonton was the first Canadian city to pass a ride-sharing bylaw.

He spoke of benefits, saying that the platform’s lack of anonymity and no cash transactions for drivers and passengers as safer. “The technology is consumer-friendly and safe,” Schafer said.

Taxi drivers and their supporters were the overwhelming majority of the public gallery. Representatives from A-1 Taxi, the Peel Taxi Alliance, City Taxi, and individual taxi drivers spoke in favour of the suspension, often praising council and councillors at every opportunity.

In addition to the usual concerns over safety, there were concerns brought up that ridesharing apps are discriminatory to disabled users, and to those who are unable to use a credit card.

Jagmeet Singh, MPP for Bramalea-Gore-Malton with the Ontario NDP, asked council to ponder deeper questions than just safety. “Will this sharing economy be a fair economy? We need to question whether these operations give back to the communities that they operate in.”

No councilors spoke in favour of Uber’s operations and services, or the need to possibly rebuild the taxi bylaws, though Councilor John Sprovieri (Regional, Wards 9 & 10) said he had received emails from residents who say they enjoy the service.

Councilor Gael Miles (Regional, Wards 7 & 8) was concerned with the enforcement of the existing bylaws. An amendment she proposed will ask the city’s legal service department about the possibility of raising the minimum fine from $500 to $5,000 for drivers are who are caught illegally driving for UberX.

City staff suggested the best way to catch illegal drivers is the undercover use of the app. However, Toronto police chief Mark Saunders has said recently that the police cannot act undercover for issues that are covered under the Highway Traffic Act, such as ridesharing and taxi operations.

The motion, which passed to applause and cheers in the gallery, included the amendment by Councilor Miles on fines, as well as an amendment to ask the provincial and federal government to step in to help municipalities regulate taxi industry bylaws.