Firangi is an upscale Indian fusion restaurant in Brampton that serves up all the favourite classics and more.

The ambiance, while upscale, is also eclectic and comfortable. It has personality: a large, original Hatecopy canvas dominates one of the restaurant’s walls. It sports the cheeky quote, “He looks at her the way I look at samosas”.

There are plenty of seating options to choose from, high top tables for casual group gatherings, booths for cozy date nights, and more.

The restaurant’s menu offers a lineup of dishes curated by Executive Chief Sanjeev Sethi, chef and owner of Host, a restaurant group with locations across the GTA. All of it inspired by Indian street food, grandmothers, and tastes from ‘back home’. At the crux of it all is a serious gem: a small plates menu. We were excited at the prospect of enjoying a bunch of different dishes, tapas-style.

We started off the tasty journey with the Manchurian Gobi ($8), a vegetarian version of the Indochinese chili and garlic chicken dish. It was spicy and delicious, most in our group didn’t even miss the chicken, the perfectly sauced cauliflower hit the spot.

We then tried out the Chicken Tikka Tacos ($11) a spiced and marinated tikka in a corn tortilla, and the Kingfisher Beer Battered Fish Amratsari ($9).

The Tikka Tacos were delicious, the restaurant gets bonus points for using corn tortillas, which give it at least some resemblance to a real taco. The meat was well spiced and nicely marinated.

The beer battered fried fish was one of the highest points of the evening. It packs a pretty good punch with its spiced beer batter. It came served with two chutneys and a spicy mayo for dipping. It was by far the best small plate we had during the evening, though nothing we ate disappointed.

We also enjoyed the chicken and cilantro momos ($8) an Indian dumpling with hot samba, and the Firangi shrooms ($12), basil marinated mushrooms topped with a giant helping of spiced paneer and other bits. Both also delicious, though the shrrooms were the preferred dish of the two.

The restaurant has lots of other intriguing offerings on the small plate menu, including a chow mein samosa. ($7) and butter chicken fries ($9). They also offer a selection of full dishes, both traditional and fusion.

The unique flair extends past the decor, wall hangings, and delicious menu. They also serve a mean mango lassi — in a light bulb. I went the sweet route. Lassi is an acquired taste in and of itself. The savoury version, which includes cumin and salt, even more so.

We closed off the eating extravaganza with the ras malai tiramisu, which didn’t disappoint either. It’s perfect for any palate; light, moist, and not overly sweet. 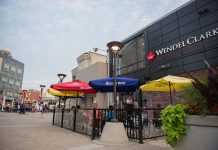