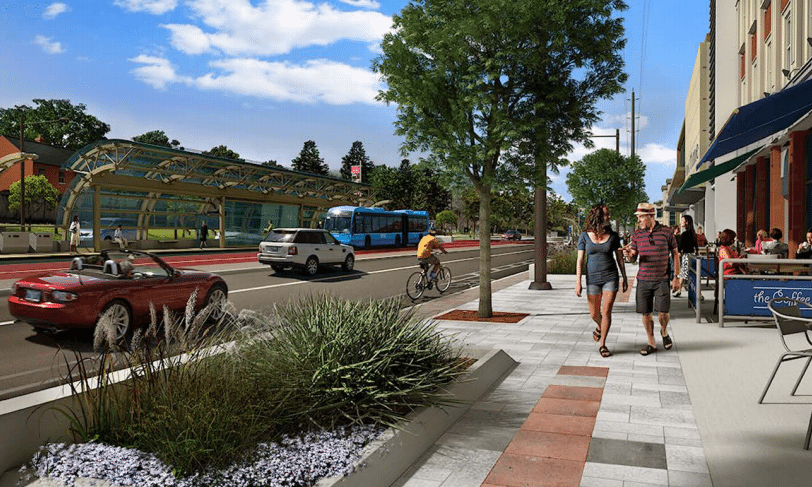 Move over Main Street, the city wants to overhaul how transit moves on Queen Street.

Last night, the city held its first public consultation session for the Queen Street Transit Master Plan. The city is studying 14.5 km of Queen, from McLaughlin to Highway 50, to upgrade with better transit, streetscaping, and active transportation.

Whether the city will move forward with bus rapid transit (BRT) or light rail transit (LRT) is up to residents to help decide.

Most people who travel to or from the area are from Brampton (60 per cent). Brampton Transit ridership along Queen is 22,455 riders on an average weekday.

There are external factors that will influence the study, like the Hurontario LRT North Alternatives routing, the GO Transit Mobility Hub at Brampton GO, York Region’s Highway 7 busways, and the potential 407 Transitway.

There are six transit options proposed for Queen Street. Eventually, it’ll go down to one type of technology (buses or light rail). Because of the varying widths of the road in different areas, it’s possible that rapid transit may operate in mixed traffic in downtown Brampton.

The six options are:

At the consultation session, most people favoured the last two options. No one liked the first two option, and only one person thought a streetcar in mixed traffic was a good idea.

Another big decision is how cyclists will move around on Queen. Most people favoured raised, separated, cycle tracks. Cycling is a big piece of the puzzle for this study, as Queen will link 18 proposed north-south cycling routes in the city along roads.

There are also a variety of streetscaping options proposed, though most of the participants seemed to favour them all fairly equally, and it’s not likely that the city wouldn’t put in new street lighting because fewer people voted for it.

Metrolinx has already done a Benefits Case Analysis for Queen Street, favouring BRT in exclusive lanes as the best value for money (BRT would be cheaper to build than LRT, though may cost more to operate), even though an LRT on Queen would generate more development and riders.

Have your say on where Queen Street goes in the future in the study’s online survey.