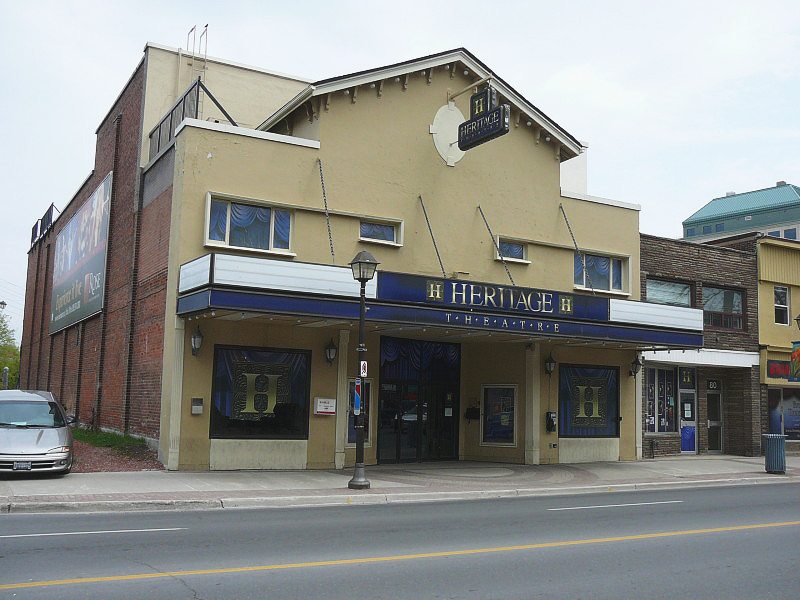 The Heritage Theatre might be seen as an eyesore to some, but for many years it was considered a major part of the cultural fabric of Brampton. Here are ten things you might not know about the Heritage.

1. Originally called The Capitol Theatre, the Heritage Theatre was built in 1923 at a cost of $60,000 (about $500,000 in today’s dollars) by architects Herbert George Duerr and B. Kingston Hall and owned by Peel magistrate Thomas H. Moorehead. At the time, admission was 30 cents for adults (which comes to $4.25 today) and 15 cents for children.

2. In 1946, the Heritage was purchased by the Odeon Theatre chain and renamed The Odeon. It was damaged by a flood in 1948, but recovered in time for the 1949 premiere of the film All Over the Town, starring actress Sarah Churchill (daughter of Winston Churchill) who attended the screening in person.

3. The theatre had once been an epicenter of activity, hosting everything from high school graduations to plays, musical performances, movie screenings, and political rallies. In the 1960s and 1970s, competition from new multiplex theatres in Brampton, as well as general disrepair, caused the theatre to decline. The City of Brampton bought the property for $185,000 in 1981; part of that agreement was a requirement that the theatre not show first-run movies for the next 40 years.

4. Not long after purchasing the theatre, the city spent $20,000 on consultants to figure out what to do with it. $23,000 was earmarked to renovate the theatre, a cost that eventually expanded to $60,000, or about $134,000 in 2018 dollars. It reopened as the Capitol Theatre on November 1, 1983 with a show by the students of Sheridan College’s Performance Studies Department.

5. The 1980s continued to be tough from a financial standpoint. There were reports which indicated that within three years of reopening, the theatre had accrued $117,000 in an operating deficit. Still, a fundraising campaign in 1984 and 1985 raised money to help further refurbish the theatre, including a “seat sale” which would raise $50,000. Some residents expressed hope that the building would be sold and the money used to build a new cultural centre, but the theatre was saved once again in 1987. Brampton City Council agreed to spend $200,000 to refurbish the theatre, with another $200,000 pledged from the province.

6. The newly rechristened Heritage Theatre reopened in October 1988 with a musical revue hosted by Alan Thicke. The Heritage Series line-up for the season included Beatlemania, Don Harrison and Catherine McKinnon, I Love You So Much It Hurts (starring Helen Porter), and a Sneezy Waters in concert. The Family Series offered Glenn Bennett and the Magic Dragon Band and something called The Fabulous Farming Show.

7. Despite a decade of success, by the late 1990s, there was discussion of how best to expand the Heritage Theatre, possibly by acquiring the adjacent property at 80 Main Street North. With renovation costs estimated at $4 to $5 million, city councilors soon began to consider demolishing the building altogether. Despite the theatre’s good acoustics, the lack of an orchestra pit, inadequate wing and dressing room space, and a small lobby were considered negative factors. Some even felt that the theatre was not a truly “historical” property worth saving.

8. A controversy soon ensued due to a lack of consultation with residents and the Brampton Heritage Board. One councilor bemoaned the lack of transparency, stating that expropriation of land should never be conducted in camera (i.e. in private). Soon plans were made to build a larger theatre in Garden Square in downtown Brampton, a place that would eventually become The Rose Theatre. The Heritage continued to host theatrical performances up until it closed in 2006, with all productions moving over to the new facility.

9. A Heritage Conservation District feasibility study was conducted from 2008 to 2009. As a result, the Heritage was saved yet again, with plans to develop it into an arts, culture, and entertainment space. In 2013, a RFEI (Request for Expressions of Interest) called for proposals on ways to reuse the entire Heritage block of buildings, including Heritage Theatre, the Downtown Brampton BIA and Beaux-Arts. Despite reports from City Council that “more than 100 individuals, companies, and groups expressed interest in the property and five actually responded with concrete ideas” (according to a 2013 Brampton Guardian article), nothing concrete was put into place.

10. 2015 saw massive cuts and changes to grant funding for local community programs. Concerns about the future of the arts community in Brampton came to a head once again when the city decided to sell the Heritage Building block in May 2017. While Beaux-Arts was given a one-year lease in September 30 (one which is transferable to a new property once agreed upon), there is still no word on the future of the Heritage Theatre.