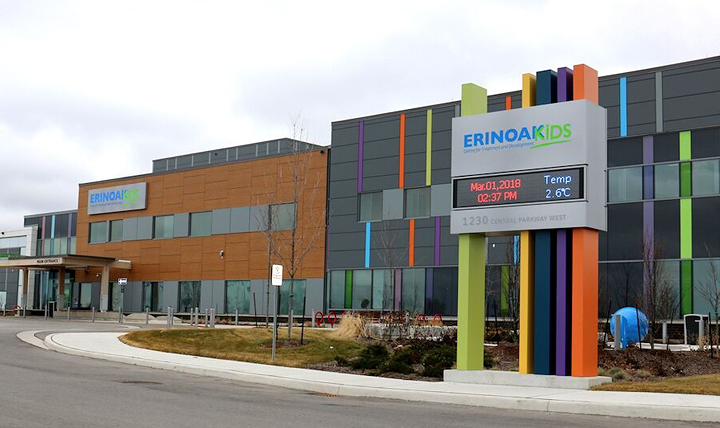 Almost 300 employees at ErinoakKids Centre for Treatment and Development are being laid off amid restructuring of autism funding by the province.

291 staff received notices Monday after being brought into a meeting. Staff were told the decision was due to a lack of funding, and that their positions would be eliminated over the next 12 weeks.

The layoffs directly affect frontline workers like therapists, supervisors and behaviour analysts. Nearly all employees at the facility in Brampton, Mississauga and Oakville who do autism-related work will be affected by the on.

Employees were told that the facility plans to re-hire 178 staff on contract positions, which will mean a loss of about 113 full-time jobs.

In a statement to Global News ErinoakKids’ director of communications, Jennifer Arnott said “In order for our organization to be able to continue to provide much-needed services to children with autism and their families in this new environment, we have had to make some significant staffing reductions, which were announced to staff today. In total, 291 positions were affected.”

ErinoakKids says the decision was made as a direct result of the controversial move by the Ford government to change autism funding.

In a statement, ErinoakKids says the centre was “significantly impacted” by the controversial autism funding changes ushered in by Premier Doug Ford’s government earlier this year.

Instead of directly funding autism treatment centres and therapists, the government has implemented a new model called the Ontario Autism Plan (OAP). The plan gives a set amount of money directly to families to choose their own treatment options.

Despite the cuts, the province is standing behind its decision.
“Our government believes parents know best. That’s why we are providing funding directly to parents, not agencies… the ministry continues to provide funding to meet ErinoakKids requirements for services for all children currently in the Ontario Autism Plan (OAP) including those on 6-month extensions of their behavioural plans, as noted by the approximately 180 re-hires this morning,” says Lisa McLeod, Minister of Children, Community and Social Services in a statement to Global News.

McLeod went on to say that the government has no plans to cut the OAP, stressing a focus on needs-based t.