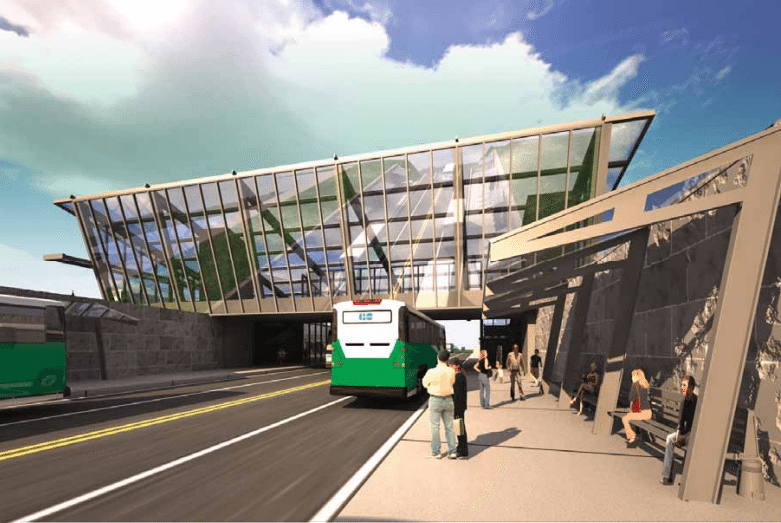 The Ministry of Transportation (MTO) has finally started studying the building of the 407 Transitway West, which will run through Brampton and York Region.

The 407 Transitway, if fully built, would stretch from Burlington to Clarington, running parallel to the 407 on the south side of the highway, with few exceptions. The full transitway is expected to be over 150 kilometres in length.

Public transit vehicles would be able to move passengers quickly from one end of the GTA to the other.

An additional benefit would be that GO Transit and other transit agencies would no longer have to pay 407 ETR fees. This would help lower operating costs on popular routes, like the 501A Zum Queen.

The section from Hurontario Street in Brampton to Highway 400 in York Region, is currently in the first phase of a planning study that will be complete in 2018.

Planning studies for the sections east of Highway 400 were completed in previous years. 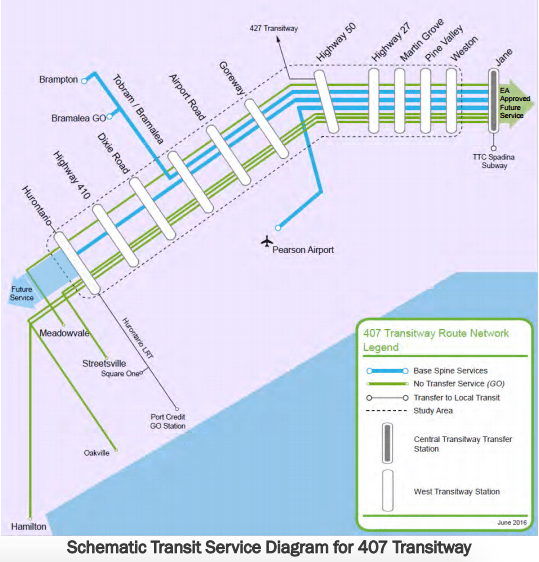 For example, as shown in the diagram above, GO or Brampton Transit buses might run from Bramalea GO to the soon-to-open Highway 407 subway station.

While not shown in the presentation slides, Bramptonist was told by a project staff member that planning for the proposed “Missing Link” freight bypass is being considered.

The transitway would sit on the north side of the hydro corridor through Brampton, while the freight bypass is planned to be located on the south side.

The 407 Transitway is not planned to have any conflict with the freight bypass — currently in the works to get Brampton Two Way All Day GO service — except in the situation involving the Hurontario Station.

Two possible transitway alignments at Hurontario would swing down to the south side of the hydro corridor in order to align with the 407 stop on the Hurontario LRT. This would put the transitway in direct conflict with the freight bypass, and may result in complicated engineering, as shown below.

A third alignment is possible, hugging the north side of the hydro corridor. However, MTO and consultant staff working on the project are trying to avoid that situation. That alignment would create a long walking transfer between the LRT and the transitway.

Moving the location of the Hurontario LRT stop is unlikely to be considered, as that would require a new study in order to amend the LRT environmental assessment.

Another potentially messy situation may involve the area around Bramalea GO. There are six potential alignments in and around the area. A new transitway-only station may be located just off Torbram, and a shuttle bus may run between the transitway and rail station, an option explained by project staff.

The transitway may just have access ramps onto Bramalea Road and buses may have to venture into mixed traffic to make the connection to the GO station.

Several options include veering the transitway north of the 407, and directly connecting with the GO train station. That option might be expensive.

However, there are three instances in the 407 Transitway Central EA where a similar option was chosen (at a future Concord GO station on the Barrie GO Line, at Yonge Street/Langstaff GO, and at Unionville GO) because the connection was deemed to be crucial.

The transitway is a long term project. It may not be needed until the 407 becomes too busy for existing transit services, like the 407 GO bus lines, or Brampton Transit Zum 501A. The future projected ridership by 2051, for example, is expected to be 7,500 people per hour per direction (PPHPD) during morning rush hour.

LRT only becomes effective at 10,000 (PPHPD). Subway ridership usually starts at 30,000(PPHPD). The transitway planning will protect and design in mind for future conversion to higher modes of rapid transit.

MTO and consultant staff are still looking for public feedback. Submit your comments at this link. You can also send comments, concerns, or questions to project staff at the emails below. Public comment deadline for this phase is January 7, 2017.