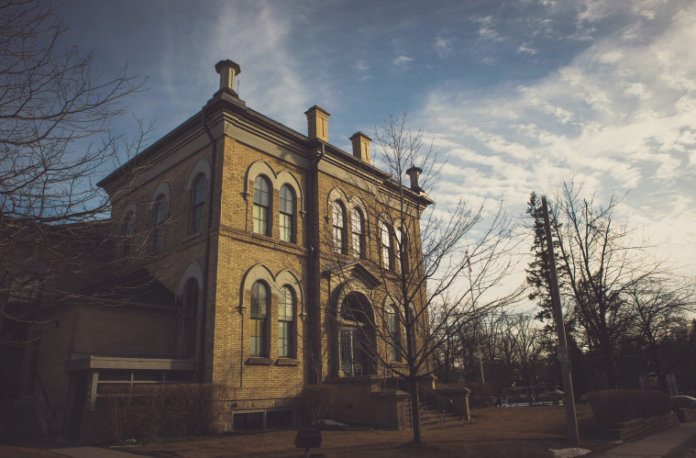 Bramptonites in the mood for some thrills and chills will be happy to know that Brampton has its fair share of haunted houses, ghost stories and legends of grim reaper sightings! Skip Halloween Haunt this year or trick-or-treating (You’re about 15 years too old for that anyway) and take yourself on a ghost hunt around the city! Here’s a few places you may be able to experience a ghost sighting or two this Halloween.


The Heritage Theatre was built in 1922 and opened the next year to the public. The theatre was used for vaudeville acts and silent films. Legend has it a young aspiring actor was murdered in one of the dressing rooms and his spirit still lingers. Visitors have reported a coldness that runs up and down their backs and a gaggle of strange voices. More than one patron of the theatre has also reported seeing a figure, similar to the Grim Reaper lurking by the theatre curtains.

Supernatural activity seems to be in abundance at Notre Dame C.S. Toilets have been reported as flushing on their own, footsteps can be heard when no one is there to claim them, doors open and close without anyone around and things go missing. Students have reported finding items moved around from their bags and in their lockers and some even claim to feel eerie chills in certain rooms or like they are being watched. Spooky!

Bovaird House has a history stretching back to the early 1800s, and as with any old house, it’s complete with its own legends of paranormal activity.  On the upper level of the house, attached to the master bedroom, is nursery which holds a rare antique crib. The crib was initially purchased by a soon-to-grandmother for he daughter’s first child. After the baby’s birth the mother sometimes heard noises coming from the child’s room and on occasion saw a misty light in the shape of a woman standing by the crib. It was eventually donated to Bovaird House. Since then, parapsychologists, ghost hunters, and others have visited the house and been drawn to this piece of furniture. The spirit woman has been deemed a friendly ghost with no menacing presence.

Where Staples is currently located used to house a movie theater. It is alleged that the manager hung himself in the office. The movie theater was later replaced by a 24 hour video store and employees of the store who worked the night shift would feel a strange presence in the office. They also noticed furniture moving on its own and doors opening with no one there.

Peel Art Gallery, once a courthouse, jail, land registry office and council chambers, was constructed between 1966 and 1867. It is well-known that many executions were held here. Prisoners were held in the jail and oft lived in cramped outdated facilities. Executions at the old courthouse are well documented and often took place in the gaol yard or prisoners were hanged from the upstairs gallows. Workers and visitors have reported hearing knocks on doors, only to find no one there and footsteps in empty hallways. Maybe the ghost of an executed prisoner?

Have you experienced ghostly activity at any of these sites? Let us know in the comments below!