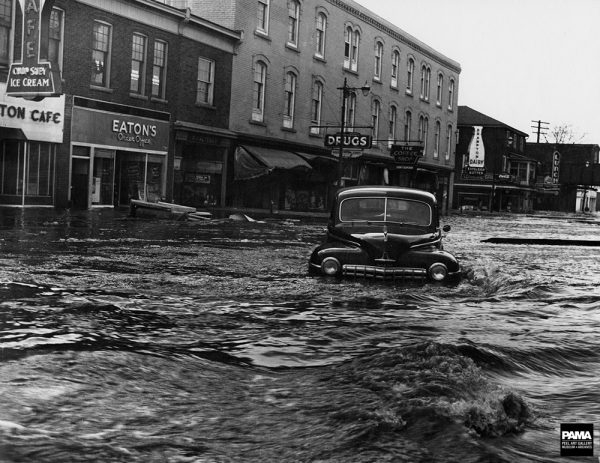 Brampton was built on the floodplain of Etobicoke Creek and this led to many major floods in the 1800s and 1900s, usually after the spring snow melted. Although the first severe flooding took place in August 1857, flooding occurred annually after 1894. The years 1911 and 1946 saw several severe floods, each seeming worse than before.

The most damaging flood took place on March 17, 1948. On that day, the rampaging Etobicoke flooded downtown Brampton with up to six feet of water. It caused $500,000 in damages, which is almost $6 million in current day money.

How it Went Down

Things seemed normal in downtown Brampton at 9 a.m. on March 17, but water started to trickle around 1:30 p.m. The Conservator (the Brampton newspaper at that time) noted that “within a few minutes the usually peaceful Etobicoke was a growling, surging giant roaring through town from the CNR subway to the flats near Guest Street in depths ranging from three to six feet.” The “outburst of the river was apparently due to the sudden thaw and the thick ice in the channel.”

This ice would prove incredibly dangerous. Cakes of ice smashed storefront windows, ripped chunks of concrete from sidewalks, flattened parking meters, and in one case, trapped a woman inside her hat shop for four hours until she was rescued. One man was trapped for three hours on the top of a Jeep. Army trucks, local residents’ trucks, and even the Chinguacousy Township road maintainer helped retrieve people from the raging flood waters. At one point, a nurse and two soldiers used a mortar mixing box as an improvised boat to escape.

Because Queen Street East had higher ground, people living west of Main Street had to walk along the CNR tracks to get to their section of town. For a 12-hour period this was the only way to get across town.

In its March 18 edition, there were two pages devoted to what The Conservator called “Flood Briefs.” These are sort of like 1948’s version of live-tweeting. The Flood Briefs include observations like:

“The oldest resident of the town reported that this was the worst flood in 63 years.”

“The town engineer lost an expensive set of survey instruments”

“It was the first time the flood had ever reached as far as Farr’s Garage.”

“The lane between the Victoria Hotel and Arscott’s was completely choked with ice to a depth of 2 ½ feet.”

“A lone dog was seen floating down Main street on a cake of ice and when last seen it was going down the river toward Long Branch.”

People were encouraged to disinfect well water after the flood waters receded by using chloride of lime. Officials indicated all water should be boiled before drinking or using for any “domestic purpose.”

By November of 1951, the Etobicoke Creek had been diverted to ensure a flood like this would never take place again. Twenty-five per cent of the $250,000 cost was paid for by Brampton, with 75 per cent coming from the Ontario government. It’s worth noting that the diversion project cost about twice as much as the total flood damage did in 1948.

Yet, at least one Brampton resident did not lose his sense of humor about everything. In the July 3, 1952 issue of The Conservator, Bill Doole wondered “What’ll we do for rescue stories now that they’ve tamed the creek?” His satirical piece reads like a slightly less sarcastic precursor to something from The Onion: “If things keep up the way they’re going, the only flood story left will be the dripping tears of brokenhearted newspapermen.”