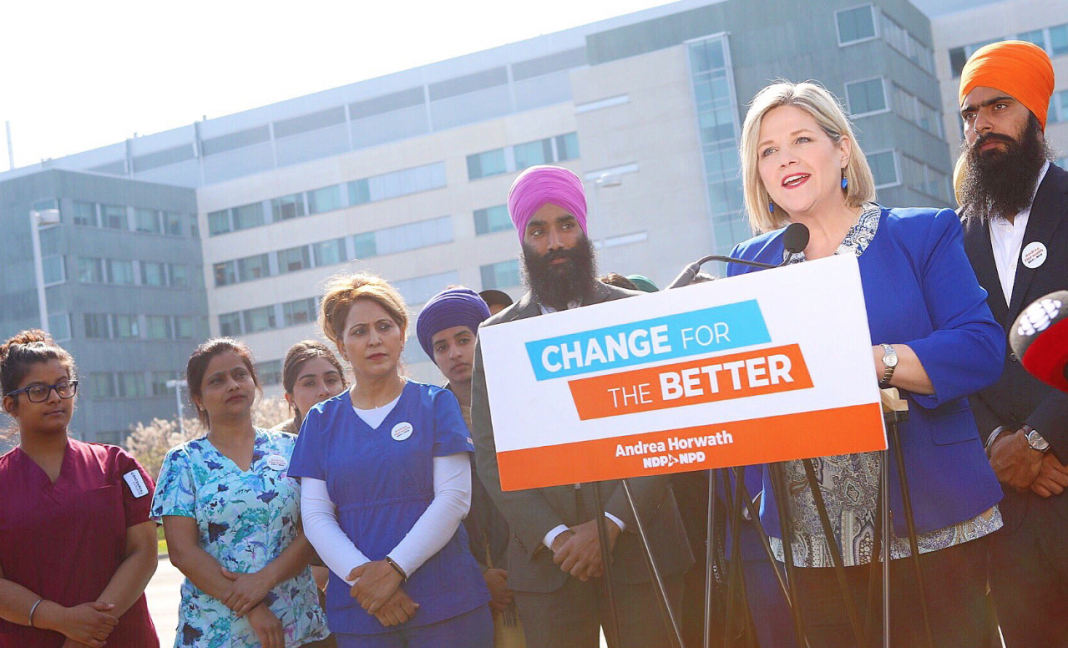 Ontario NDP Leader Andrea Horwath made a campaign stop in Brampton Monday morning where she made promised to expand health care in the city in a major way.

Horwath announced that the New Democrats will build a third hospital in Brampton, as well as expedite expansion of Peel Memorial Hospital to turn it into a full hospital, in hopes of ending hallway medicine in the city.

“It’s time to deal with the painfully long waits for care in Ontario hospitals, and give families the care they deserve,” said Horwath.

“After 15 years of Liberal governments, the long waits in Brampton have gotten worse and worse, while the number of patients left on gurneys in hallways has grown. And Doug Ford and the Conservatives have promised to cut more than $6 billion across the board, and privatize as many services as they can. Instead of building up health care for Brampton families, that would make waits longer, and the hospitals more crowded,” said Horwath.

Brampton’s rapid growth has caused severe overcrowding at the city’s only full-service hospital. In 2016, 4,352 patients were treated at hallways at Brampton Civic. The opening of Peel Memorial’s urgent care centre was expected to ease emergency room visits, but did little to help. Horwath says she would like to see Peel Memorial operational around-the-clock.

Brampton Civic was originally built to serve 80,000 visitors annually, but has been seeing over 138,000. Horwath says that in the coming years, 800 additional hospital beds will be needed in the area to keep up with the population growth, and that if elected the NDP plans to work with the city to ensure a third facility is built.

Potential sites have already been identified: the city has carved out land on the southwest end of the city, but not any budgets or timelines as of this writing.

“People in Brampton – including health care workers, members of council, and health care experts – have been raising alarm bells about the crisis in area hospitals for years,” said Horwath. “So let’s do something about it.”

Horwath and the NDP have committed to investing $19 billion into hospital infrastructure and operational funding over the next 10 years. They also plan to invest $1.2 billion immediately to end hallway medicine and address overcrowding, as well as add 2,000 new beds right away.