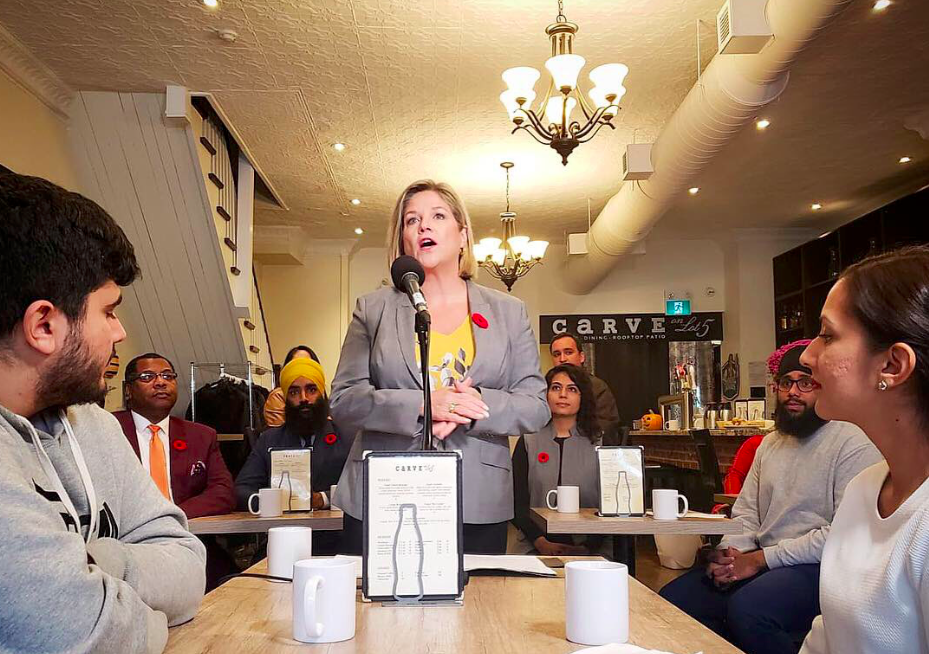 Leader of the NDP and the official opposition in Ontario, Andrea Horwath, was in Brampton Monday morning to announce she would put forward a motion to save Brampton’s university funding, along with the potential universities in Markham and Milton.

Horwath made the announcement in downtown Brampton at local restaurant Carve on Lot 5 saying, “we’re gonna give those Brampton MPPs and Doug Ford a chance to change their minds.”

The motion comes after the Ford government announced that it would cancel previously committed funding to universities in Brampton, Milton and Markham. Brampton was originally slated to receive $90 million to fund a Ryerson University campus (in partnership with Sheridan College) downtown.

RELATED: Brampton’s Ryerson University Campus Could Be Saved After All

Now Horwath is calling for the funds to be recommitted in the government’s spring budget.

“Doug Ford has ripped opportunity out of the hands of thousands of students that were counting on these campuses. Too much depends on getting these universities built to let Doug Ford rip up expansion plans overnight,” said Horwath. “For too long, parents in growing communities like Brampton were forced to send their kids out of the community to get an education.

Brampton stakeholders including Ryerson University, Sheridan College, the Brampton Board of Trade and City of Brampton have been scrambling over the past week to try to salvage the situation.

Two of Brampton’s councillors-elect are suggesting Brampton use the $150 million originally earmarked for the Innovation Centre towards building the university.

Talks are still happening between the various parties involved, but a funding commitment towards operating the university would be required at some point from the province.

Brampton’s PC MPPs have said the university is “on pause” and that the government is willing to hear any business cases that could ensure the project continues without a funding commitment from the province.

Horwath’s motion to bring back the funding will go forward at Queen’s Park on October 29.