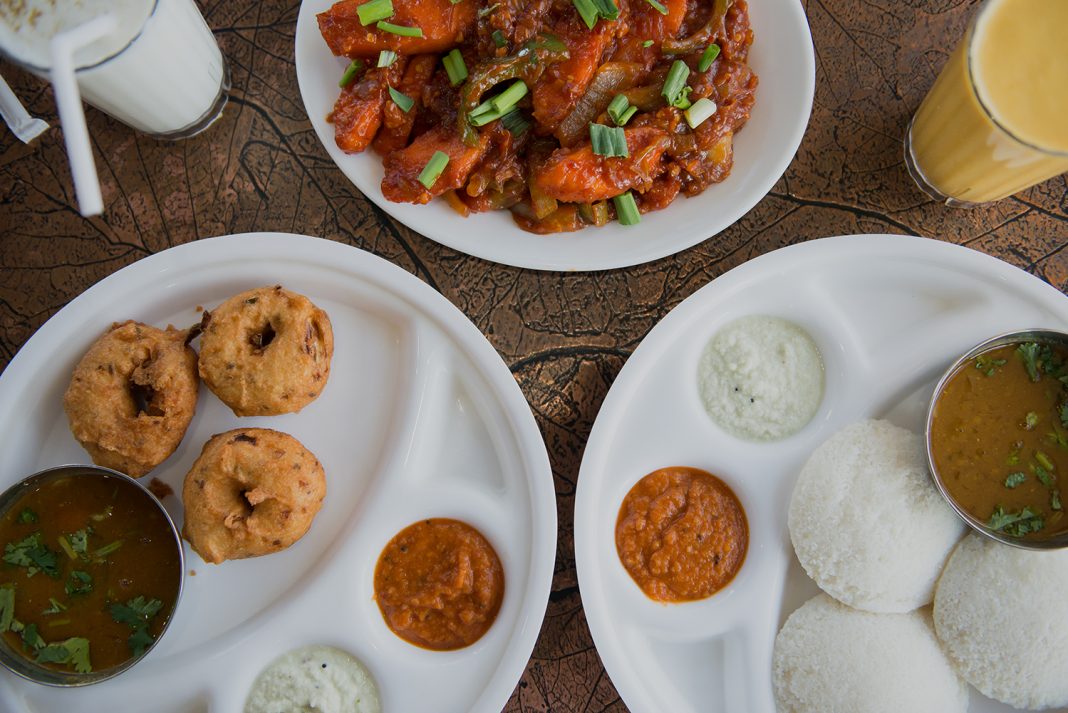 Sitting in the Sirens Outlet plaza off Hurontario at Bovaird is one of the most popular vegetarian restaurants in Brampton: a small South Indian, Chennai-style dosa hut called Annalakshmi. It has caught the attention of Toronto food critics and is attracting foodies from Brampton and beyond.

It looks like a family style diner gone ethnic. The booths, tables, and chairs are simple and the menus show wear-and-tear, not surprisingly, since its almost always packed at dinner time.

One of the owners, Jay, says they want to keep it small and simple for families. The setup is first come, first serve — there are no reservations. He insists that the food is better fresh rather than take-out; come with your family, sit for a meal, and enjoy.

Despite the restaurant’s humble appearance, the food is spectacular. Annalakshmi is a predominantly a dosa hut. Dosas are a thin crepe-like specialty out of South India and Sri Lanka. The base of most meals are variations of rice flour, semolina, and lentil combinations.

Bramptonist has written about Annalakshmi’s exceptional chili idly ($6.99) in the past. Idlies are small round cakes made from rice flour, traditionally served with three chutneys coriander and mint, coconut, tomato chili, and sambar — a curried lentil soup filled with a variety of vegetables.

For its chili idly the kitchen slices the idlies thin, dusts them with a corn starch batter and pan fries them until crispy, along with onions and green peppers. They are coated with a tangy tomato chili sauce, reminiscent of the chili chicken at Hakka restaurants. The idly has a similar texture to chicken in this dish, making it a great vegetarian alternative.

The special rava dosa is a fan favourite ($10.49), introducing sautéed onion and coriander on top of a mound of flavourful potato masala curry highlighted with cashew and coconut powder. Reminiscent of eating dosa in the Little India neighbourhood in Toronto, the potato masala is still chunky, not mashed and spread across the dosa as we are starting to see more often in local restaurants. Each part of the meal complemented the others, between the dosa and masala, the sambar and chutneys.

The north-south fusion of the pav bhaji masala dosa ($9.99) is surprisingly delicious. The dosa is made strictly from rice flour. The pav bhaji – a mashed mixed-vegetable slow-cooked curry (bhaji) with a special bread roll used for street food (pav) – is adapted for the dosa, milder than traditional and topped with onions.

The “Taste of 7 Uttappams” ($9.99) is a fantastic option to try mini-versions of the thick rice-flour-and-lentil pancakes. They are each mild in flavour and have a cake-like sponge texture. Uttappams variations include cheese, onion, onion and chili, tomato and onion, masala (potato masala) and mixed vegetable. While popular, the bold flavours of the dosas and the chili idly are more memorable than the uttappam, making them shy side-kicks instead.

Overall, it is easy to understand Annalakshmi’s popularity as a staple vegetarian restaurant in Brampton. The meals are immensely flavourful, the set-up is simple, it attracts not only the South Indian community but crosses cultures, as well.