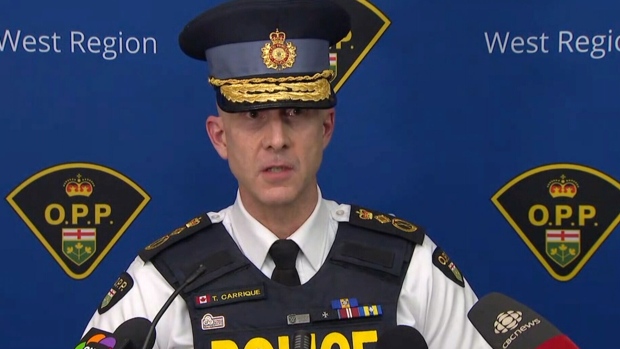 OPP Officer shooting and recent Peel arrest have led to calls for reform of Canada’s bail policies for violent offenders and firearm crimes.

January 7, 2023 – On January 4, Elijah Simpson-Sweeney, a 22-year-old man with a history of violence, was arrested by investigators from the 11 Division Criminal Investigation Bureau of Peel Regional Police for attempted murder in connection with a shooting in Mississauga on December 14, 2022.

At the time of his arrest, Simpson-Sweeney was already on out on bail for separate attempted murder and firearms offenses, and was wanted by both the Toronto Police Service for second degree murder and attempt murder, as well as another Ontario police service for the offense of flight from police.

In addition to the charges related to the December shooting, Simpson-Sweeney has been charged with two counts of assault, chokes/suffocates/strangles, and criminal harassment. He is being held for a bail hearing and appeared in the Ontario Court of Justice in Brampton.

During a press conference in October 2021, Brampton Mayor Patrick Brown expressed concerns about the safety and well-being of residents due to the ease with which people arrested for crimes are quickly released. “Too often we see a revolving door justice system, where I see families that are shattered, and the senseless, avoidable loss of life because of loopholes in the justice system,” he said. “We need to advocate governments to close those loopholes, because there’s nothing more disappointing than to see our frontline police officers do the hard work—great investigative work—to make sure that those who should be behind bars are, only to see them released.”

Too often we see a revolving door justice system, where I see families that are shattered, and the senseless, avoidable loss of life because of loopholes in the justice system

Brampton Regional Councillor Michael Palleschi also expressed frustration related to examples of injuries and death at the hands of individuals who had been apprehended by police but then released shortly thereafter on bail. “…A Brampton woman was murdered (allegedly) by her boyfriend, while he was out on bail. If our justice system worked, she would still be alive today,” Palleschi said. “Under our current laws, violent crimes get a slap on the wrist, while their victims get a slap in the face.”

The President of the OACP is Nishan Duraiappah, who is also the Chief of Police for the Peel Regional Police Service, released a statement on behalf of the OACP saying, “As we have done so often over the past few months, the members of Ontario’s police services have had to come together again to support one another as a result of a senseless tragedy; police officers, their families and loved ones, and the communities they serve have had to face incredible and unthinkable grief due to firearm-related violence. Moreover, such acts of violence all too often result in significant harm to members of the public. These acts, which have also included victims of intimate partner violence and hate-based crimes, are often perpetrated by individuals with previous offences for violent crimes and previous convictions for firearms offences.”

In many cases where the accused was on pre-trial release for an allegation of violence or firearms offences, the subsequent offences were completely preventable. As Ontario Provincial Police Commissioner Thomas Carrique, a member of the OACP Board of Directors, observed, “something needs to change.”