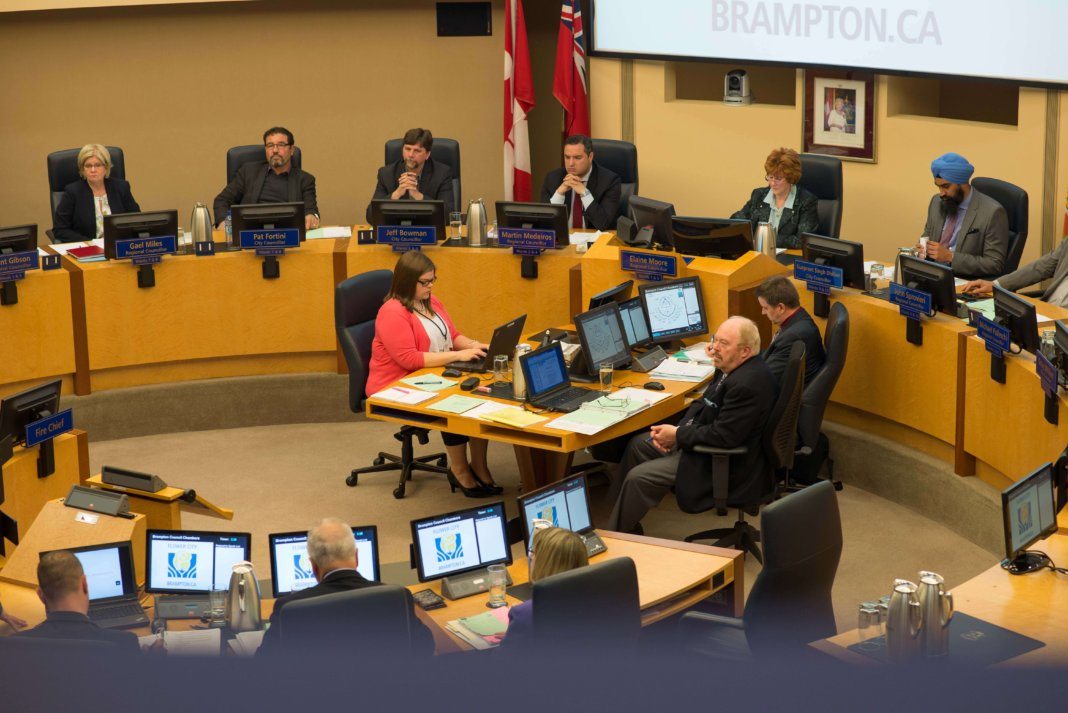 All meetings are open to the public (aside from items which are specifically marked as closed), and are generally held in the City Council Chambers, unless stated otherwise.


October 22, 2018 is the date of the Brampton municipal election. Several members of council have decided not to run after holding seats for many years, and of course the election may bring new councillors in as well. As such, council always has a formal transition and orientation session. This presentation (page 5) provides a reflection on the 2014 transition, and gives an opportunity for councilors to discuss any changes to the 2018 period. The new council doesn’t actually meet for their first meeting until the first week of December, and council training occurs throughout November.

A digital guidebook (page 13) for existing and new councilors is being written for November. The book will prepare those elected for their duties as a member of council, how-to guides for office set-up, resources and guidance, and direction and links to council policies. The guide is split up into three sections: daily operations, governance, and accountability.

The council chambers will undergo renovations (page 23) starting this year, as the current chamber was deemed inaccessible under provincial accessibility regulations. As such, there is an opportunity to change the seating assignments for council members.


A special council may be called at any time to discuss items that require a large amount of time to discuss, especially if it is anticipated that there will be a lot of delegations from the public. All members of council, including the mayor, are expected to attend and treat it the same as a regular council meeting.


This special council meeting will see the public speak, as well as staff and urban consultant Larry Beasley, on the matter of the Brampton 2040 Vision plan and document. Bramptonist has written a preview of this document that conceptually maps out and documents how the City of Brampton will grow in the next 22 years in key areas such as the environment, development, transportation, arts, culture, sports, health, and social policies.


CoA is a committee comprising staff members and residents, not elected officials. This committee handles minor zoning adjustments for new developments, as well as new businesses in existing developments. Minor adjustments may include things such as adjusting the zoning to allow for compatible but not explicitly allowed uses, reducing parking minimums, and minor height and setback adjustments.


A block plan for the Northeast Corner of Bovaird and Mississauga proposes to split a 9.82 hectare piece of land up into 8.05 and 1.77 hectare pieces. The bigger piece will be used for commercial/retail purposes, and it is proposed that the smaller piece be used as residential in the future.

A Motor Vehicle Rental Business at 8550 Torbram Road (Unit 13) is requesting a parking minimum reduction from eight space to two spaces. This business had a temporary permit for five years which just expired.

Developer Daniels Corporation is seeking an extension of an existing permit to allow 1 Beckenrose Court to be used as a sales office as well as model homes.

A motor rental business at 2 Kennedy Road South is requesting an extension of the permit that allows that specific business type to exist within the zoning for the plaza, including the outdoor storage and allowing only 262 spaces whereas the zoning requires 278 spaces.

An applicant at 252 Clarence Street would like to operate a motor vehicle sales business which isn’t allowed in the zoning. They are also asking to operate a drive-thru with 10 stacking spaces to allow for a washing facility (both aren’t allowed).


CoC is attended by all members of council, except the mayor (though the mayor is permitted to be a member at this committee). This committee hears new reports from all areas of the city, as well as issues from the advisory committees. This is the confirming step before final council meeting approval.


There is one announcement by Brendan Healy, Artistic Director for Performing Arts, revealing the 2018/2019 Rose Theatre season.

The city of Brampton has to give the developer of Mount Pleasant Block 51-2 (northwest of Wanless and Chinguacousy) extra funding (page 13), as the developer has built more parkland based on a city request to conform with the developer. This is known as a Parkland Over-Dedication. The city will pay the developer $1,967,292.31 from the city reserve dedicated to this purpose.

There is a recommendation report (page 29) from planning staff to build a Memorial Wall adjacent to the cenotaph in Ken Whillans Square in front of City Hall. Royal Canadian Legion Branch 15 delegated to council in February requesting council build such a wall. Work on this project will keep in mind future changes to Ken Whillans Square, which may be redesigned (though there is currently no funding for it) as part of the Downtown Reimagined Project.

There is a new staff report (page 32) discussing two elements of this project: roadway surface material and construction staging.

While more expensive than asphalt ($2.5 million vs $500,000), city staff are recommending that interlocking pavement be used on the surface of the road way on Queen Street and Main Street within the project zone. The sidewalks and bike lanes are already supposed to use this surface material, and doing so with the road way unifies the streetscape. Aside from the initial cost, upkeep will be pricier, but overall interlocking pavement is more stable and has a longer lifetime.

Staff are also recommending to fully close Queen and Main at the same during the water main work, instead of partially closing the lanes or doing one street at a time. Doing one street at a time would make the construction project last seven to eight years, partially closing lanes would make it last 4.5 to five years, and fully shutting down would only last 2.5 to three years.

The city is exchanging land with Enbridge (gas utility company) in the Hurontario and Steeles area. The city, in order to build the Brampton Gateway Transit Terminal, had to buy the full Enbridge property on the northwest corner. However, there is a sliver of land left that the city no longer needs. As such, they will be swapping land (page 39).

The city owns a building at 115 Orenda Road, that they wish to sell (page 46). The city no longer needs the building, and have told tenants, who are primarily community groups, that they need to vacate the building by September 30, 2018.