A side note: since the new council elected on October 22 won’t be officially inaugurated until December 3, the council elected for the 2014-2018 term will be presiding over the meetings for the next two weeks.

A special council may be called at any time to discuss items that require a large amount of time to discuss or an urgent matter, especially if it is anticipated that there will be a lot of delegations from the public. All members of council, including the mayor, are expected to attend and treat it the same as a regular council meeting.


This report (on page 4) is in regards to a disagreement between Regional Councilor Gael Miles (Wards 7 & 8) and City Councilor Pat Fortini (Wards 7 & 8) on the latter’s remarks to the media about the concerns over the purchase over Riverstone Golf Club in March.

While the commissioner does find that Fortini’s statements were inaccurate, they don’t violate council conduct rules because they were made as opinion remarks. Also, several of the rules cited by Miles aren’t applicable for this situation.

The complaint is dismissed.

This complaint is related to the first complaint (page 26).

The gist of the situation is that Fortini alleges Miles printed off derogatory comments about him from /r/Brampton (Brampton’s Subreddit), highlighted particular comments, put the prints into a City of Brampton brown envelope, and then shoved it under his council office door after him and his assistant left for the day. It is known that Miles printed the paper, but is unknown whether Miles used a city staffer to deliver.

Fortini is essentially alleging that Miles is bully, which Miles denied. She also denied delivering the comments anonymously.

The integrity commissioner states that since the allegations can’t be proven, the code of conduct wasn’t violated. He further notes, and is probably directing this comment as a lesson, that their position is allowed to receive complaints from every resident (600,000 of them) but he mostly deals with complaints from the 11 members of council.

As reported by Bramptonist previously, the Integrity Commissioner will be formally resigning in February, due to a conflict of interest with regard to Mayor-Elect Patrick Brown.

This committee handles all planning and development issues and comprises all of council, except for the mayor. Generally, an evening meeting means there is at least one item on the agenda that has a mandatory public meeting requirement. All members of the public are allowed to speak on any item on this agenda, regardless if they live nearby or not.


The Day Care on Wanless

Awkwardly, the first page of this report is blank (page 6). However, the applicant is proposing a three-storey daycare facility northwest of Wanless Road and Queen Mary Drive. The site would have 57 parking spots, including one accessible space, and access would be off Wanless. The daycare would have 380 children and 62 staff members at capacity, and there would be four outdoor play areas. Traffic and tree studies are underway.

A developer is proposing (page 21) a fairly standard single-detached housing subdivision with 54 units, a park, a stormwater management pond, and environmental buffer lands. This would be on the southwest corner of Mayfield Road and McVean Drive in the Vales of Humber area. The zoning is “rural estate” which means the proposed density has to be revised. Also, the proposal doesn’t meet the city’s minimum sustainability standards.

Rice Development, a local developer, is proposing (page 36) commercial uses for a plot of land on the north side of Bovaird next to Ironside Drive. Notably, this land is zoned industrial and primary intensification corridor, and would need to be rezoned. A multi-unit commercial-retail building with 20 units, a self-storage warehouse, and other non-industrial uses are proposed. The site currently has four industrial buildings with a variety of industrial and non-industrial uses. 906 parking spots are proposed.

A Strip Mall at Queen and Creditview

A developer is proposing (page 54) a fairly standard strip mall with two buildings (12 units) wrapping around an existing residential property on the northeast corner of Queen and Creditview. The city has identified a historic hamlet in the area and says the proposal doesn’t fit the character of the area.

Two Hotels and a Banquet Hall

It’s explanatory: two hotels and a banquet are being proposed (page 73) for the southwest corner of Mississauga Road and Steeles Avenue West. Both hotels would be seven storeys. There would also be a 10-storey office building with 1,042 parking space (633 underground). 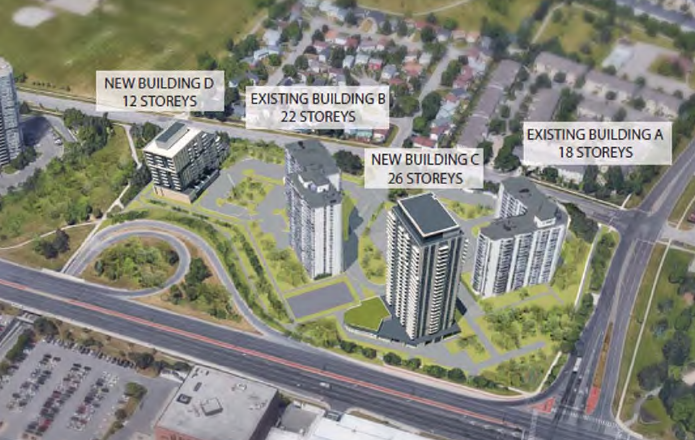 One of the apartment complexes on Hanover Road near Chinguacousy could be getting two additional apartment buildings on site (page 90). One building will be 12 storeys and the other will be 26 storeys, adding 348 units. There will be 168 one bedroom units, 206 two bedroom units, and 10 three bedroom units. 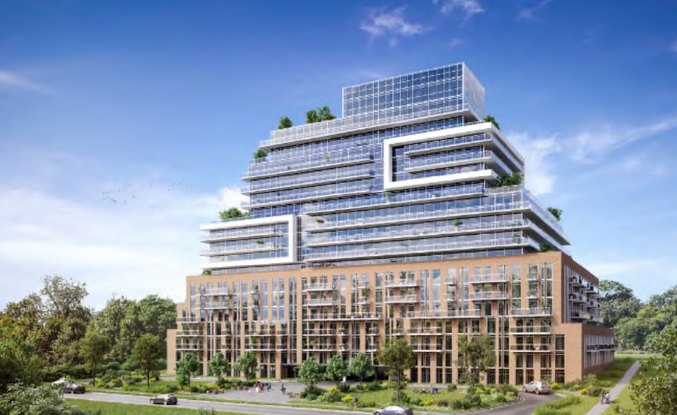 Overlooking the Etobicoke Creek, there is a proposal (page 110) for a 17-storey apartment building on Scott Street. The building would be tiered, set back in various places and would have 358 apartments. There would be 266 one-bedroom, 52 two-bedroom, and 40 three-bedroom units. 467 underground parking spaces would be on site (17 visitor spots and 10 accessible spots). The existing six-storey building would be demolished.

A developer is proposing (page 128) three-storey building with offices, medical offices, and retail units at 10394 Hurontario. The zoning is currently industrial. 83 parking spots would be on the side and rear yards.