Three of the the most anticipated pieces for Brampton’s university plan have slotted into place: the funding, the location, and the opening date.

The location will be in downtown Brampton, specifically at the southeast corner of Church Street West and Mill Street North. This is right on the main parking lot of Brampton GO. 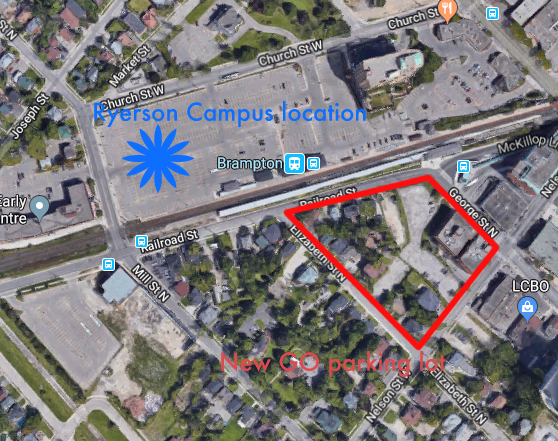 This campus will be a joint-venture with Sheridan College and would open in the Fall of 2022. The funding is to support the land purchase and construction of a campus for up to 2,000 students.

For commuters worried about the loss of parking, Metrolinx has been assembling land south of the GO corridor for a new parking lot and has started work on it. There was a hint in the last Metrolinx board meeting that Ryerson was looking for a Brampton GO station.

Malhi says the location in downtown is important for convenience to local businesses, unlocking development, building momentum along the innovation corridor, and to provide transit access along the GO line for students and faculty.

Some more details were released by the city. Programming will be focused on data science and business programming, with experiential (co-op) learning. There will be a partnership for a new National Centre for Cybersecurity.

The Centre for Innovation (CFI), which the city is funding up to $100 million, will be located on George Street next to the Nelson Street parking garage. Previously, that site was slated for a new central library as part of Phase Two of the Southwest Quadrant Plan. The new CFI will include a Ryerson library, a Brampton public library (to replace Four Corners), and an innovation zone, similar to the DMZ in the downtown campus.

Today’s announcement isn’t without controversy. There was an issue raised at the April 18 Council meeting, where Councilor Michael Palleschi (Wards 2 & 6) and Elaine Moore (Wards 1 & 5) questioned the decision to host the announcement at a private, paid, Brampton Board of Trade event instead of in a free, public venue like City Hall.