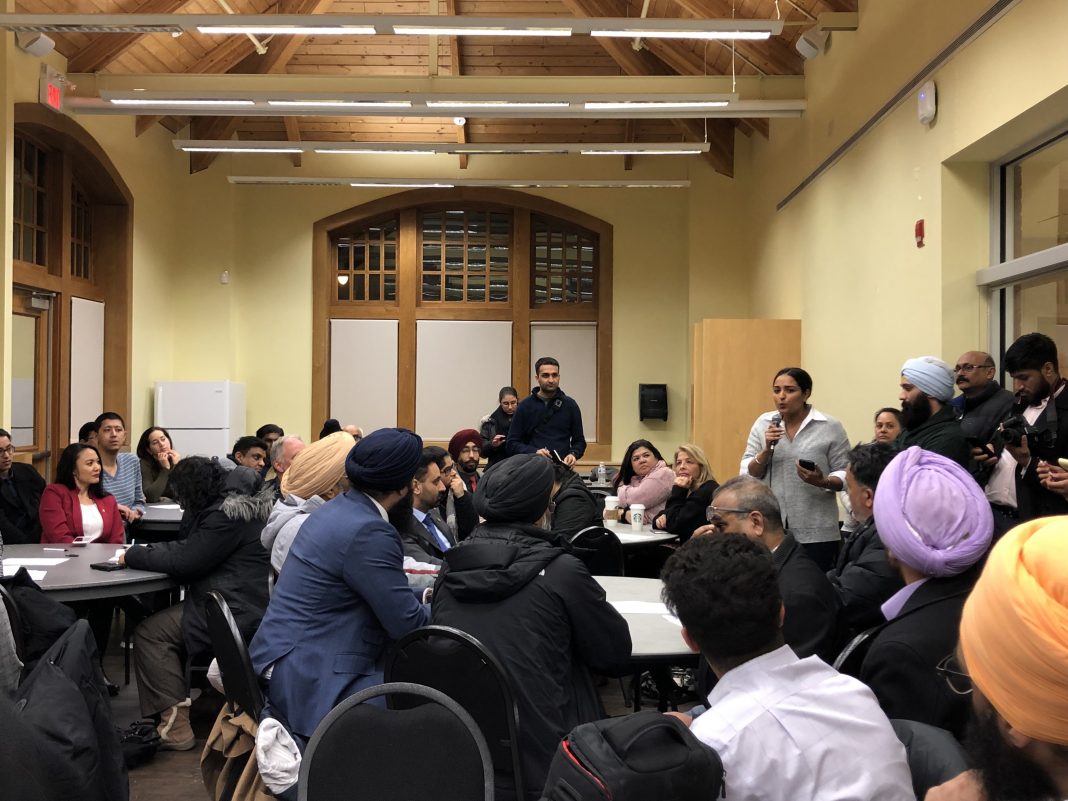 Brampton has been ground zero for what’s been coined “hallway medicine” after reports found that thousands of patients were treated in hallways at Brampton Civic in 2016 and 2017 due to hospital overcrowding.

Brampton’s only full-service hospital and emergency room has been bursting at the seams for years, servicing double what it was originally intended for, and with the lowest per capita funding in the whole province.

Naturally, residents are upset with the inaction over the years. The lack of funding is being felt even more palpably as Brampton continues to be one of the fastest growing cities in the country. The issue has come to a head and residents say they want to see action immediately.

That tension was felt at the town hall, which was organized by a group of concerned citizens. Sarkaria and Sandhu arrived 45 minutes late to a barrage of questions from upset citizens, and a vocal group of NDP MPPs.

Due to their tardiness, Sarkaria and Sandhu missed roundtable discussions with residents on how they felt the government should tackle the issue — something that didn’t go unnoticed.

“I’ve actually been here since 7:30 and sat at these tables and asked questions. I think that’s what our elected officials need to be doing…not showing up late then saying “we’re going to advocate, said MP Sarah Singh, Brampton Centre. “You didn’t actually listen to any of the concerns raised by the people here.”

The Brampton PC MPPs arrived just in time for residents to take the floor and share their concerns with the whole room. Residents shared similar sentiments — they want action, and they want to see it now.

Sarkaria and Sandhu were criticized for not being vocal on issues affecting Brampton, and for often being absent in the legislature when key decisions have been made on things affecting the city, like the university, and hospital funding. Both MPPs were absent for a vote brought forward by the NDP to fund hospital in Brampton.

That vote received a resounding no from the PC caucus. Since then the topic hasn’t been broached again in the legislature, which some say indicates that despite the Ford government’s knowledge of the escalating situation in Brampton, that it isn’t prepared to intervene any time soon.

Sarkaria says he and his colleague are doing work “behind the scenes” like meeting with members of caucus including the Minister of Health Christine Elliot.

“Brampton has been systemically underfunded, it’s a systemic issue and we’re trying to fix a lot of things here, and ending hallway medicine is one of them,” Sarkaria told .

Despite the pressing nature of the issue, Sarkaria didn’t provide any timelines on when Brampton might expect to receive funding for a second hospital, or even for the expansion of Peel Memorial.

NDP MPP Kevin Yarde (Brampton West) pointed out that the PCs have only committed $90 million towards healthcare in Ontario when the need is more than triple that at about $300 million. Reports suggest Ford plans to cut $8 billion in hospital funding, and those cuts won’t bode well for Brampton’s already strained system.

NDP MPP Gurratan Singh (Brampton East) says it just isn’t enough. “We have a majority Conservative government, and if they cared about Brampton’s healthcare needs, they could act immediately. But they’re not acting,” Singh told . “It’s time for people to be upset and to say that Brampton needs and deserves investment in our health care immediately.”

Changes are coming to Ontario’s health care system. The draft of a bill was leaked last month indicating that the Ford government plans to move forward with privatizing health care. It also indicated that the Ministry of Health plans to dissolve Local Integrated Health Networks (LHINs) in favour of a super agency that would oversee all hospitals.

The Ford government says the move will create efficiencies and allow it to allocate more funds towards frontline care. No funding commitments to Brampton have been made as yet.

Even if funding is committed towards a second full hospital or to expand Peel Memorial, a functional facility is still years out, and an interim solution will be needed.

“Any decision will take three to five years to materialize and in the meantime, patients are sitting waiting in hosptal hallways, and those are just the ones you see when you walk through the emergency ward,” says Paul Vicente, City councillor in Ward 1/5. “We don’t have the luxury to see how many patients are on stretchers and on beds in the hallways elsewhere. It’s getting to a critical point and we’re still 5 years away from a hospital.”