In an email following the July 8th special council meeting to approve or nix the LRT–Don’t get too excited, the vote was ultimately deferred and a decision still has not been made–Councillor Elaine Moore expressed outrage that a prominent landowner and investor in Brampton was not allowed into the meeting after arriving later than the large influx of people who ultimately filled the chambers. 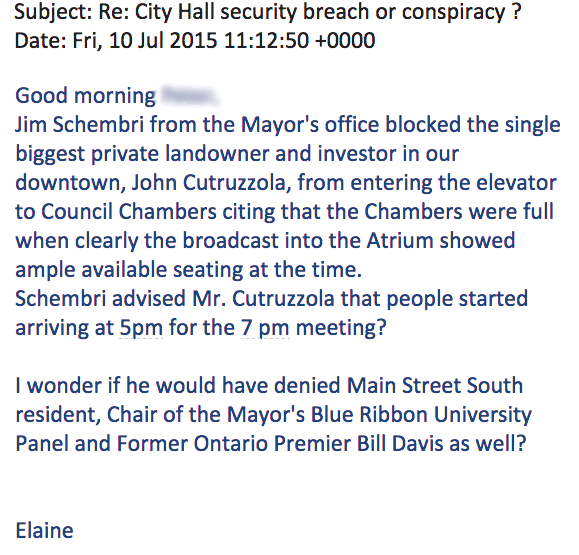 Now the question is, why is Mr. Cutruzzola more worthy to be present in council chambers than any other Bramptonian? Mr. Cutruzzola have been let in because he has money and made sizeable investments in the city? Does that make him superior to the regular taxpayer or citizen? Clearly Councillor Moore believes so, she did not express outrage for the many other people who had to stay in the city hall atrium.

Many people arrived to the July 8th meeting two hours before it was slated to begin. When the doors opened, there was a very large influx of people and the chambers filled almost immediately. So much so, that many people delegating, both for and against the LRT, were not able to get in. It was clear that public interest in this issue exceeded the city’s expectations. Many people who arrived long before Mr. Cutruzzola were asked to take a seat in the atrium because space was lacking.

I hear no outrage or disappointment for the many Brampton residents without a significant bank account who were not able to get in. The blatant classism in Brampton needs to stop. Why should someone get a free pass just because they’re a prominent figure? Mr. Cutruzzola was not delegating. Why should regular citizens be put second?

It’s disappointing that some of our city councillors are willing to let this clear bias persist. It also brings to question why Councillor Elaine Moore seems to have such a vested interest in Mr. Cutruzzola?

It also leads one to question whether Councillor Moore has the interests of regular Bramptonians in mind, or solely of those who have well lined pockets. Do the voices of only those people matter?

In a Star article, Councillor Moore was also quoted as saying the attendance at the meeting was clearly orchestrated by the Mayor. I, along with many other regular citizens were there to speak on something we believe in strongly. To have our efforts deemed fraudulent was insulting.

Many of us spent hours writing delegations, creating Powerpoint presentations, encouraged our friends and neighbours to be involved in the process and even went so far as to leave our regular 9-5 jobs and small businesses early to be there in order to secure a seat.

It seems some of our councillors are intimidated by the amount of historic engagement the Hurontario-Main LRT debate has brought. The rest of Brampton has come out to play. Engagement is no longer dominated by Brampton’s elite. For those Councillors who may rely on the support and good fortune of these prominent people, it must be intimidating.