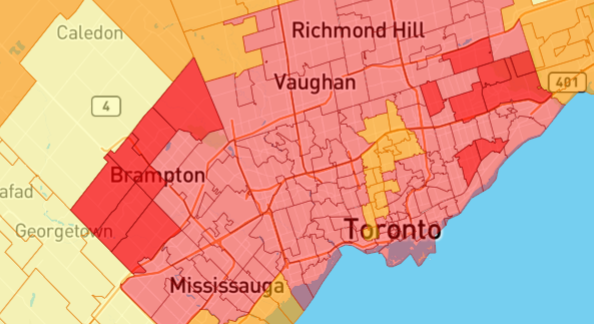 Kanetix, a car insurance rate comparison tool, has released their latest list of premiums across the province, and unsurprisingly, Brampton tops it.

The highest ranking cities all fall within the GTA, and Brampton’s spot at the top means residents pay an estimated premium of $2,392 per year, about 65 per cent higher than the rest of the province.

Brampton’s neighbours in Mississauga take the third spot, with premiums at $1,930 — 33 per cent higher than the provincial average.

Some of the lowest rates in the province can be found in Hawkesbury, Renfrew, Petawawa, Pembroke, Port Elgin, Kincardine, Perth and Brockville — among others.

Drivers in Hawkesbury, Ontario pay premiums at about $956, which looks like pocket change next to Brampton’s $2,392 premiums.