The proposed project would take the Hurontario LRT from Steeles Avenue to Downtown Brampton, via either Kennedy Road or McLaughlin Road. Brampton council infamously rejected the EA-approved Main Street alignment in late 2015.

The funding will be taken from the city’s General Rate Stabilization reserve.

City council voted 7-4 to approve an amended motion, which will request the Ministry of Transportation and Metrolinx to reimburse the city the $1.7-4 million from the original Hurontario-Main LRT study and put the funds back into the reserve.

Several delegations spoke on the issue, calling on the city to not fund this project.

Kevin Montgomery would like the city to pilot Zum lines on Kennedy and McLaughlin, in order to build ridership first, before an LRT is considered.

A previous exercise with the 2015 Transportation Masterplan has revealed that Kennedy should have a Zum route by 2041 running from Steeles to Sandalwood Parkway.

Brampton citizen Lisa Stokes listed several projects that could be better funded with $4.4 million, including the Howden Recreation Centre retrofit, 4,400 trees to replace those affects in the ice storm, or 44 new shade structures.

Jeffrey stated she felt like she was in the movie Groundhog Day, saying she feels “stuck in the middle of an exercise that wastes taxpayer money with no clear end goal.”

Both Gibson and Moore took shots at previous Ontario Liberal governments, where Jeffrey was a MPP. They took aim at the province wasting money on gas plants and ORNGE.

The council voting record broke down as follow (ward numbers in brackets):

Only one alignment can be carried onto the Transit Project Assessment Project, which is a highly accelerated end stage EA phase.

The EA process is expected to take three years. It will begin with the awarding of the contract in July 2017, and end in Summer 2020.

Council also approved a new senior engineer position who will be in charge of all future city rapid transit projects, including this one and the Queen Street line.

In October 2015, Brampton council approved, 6-5, to terminate the Hurontario LRT Steeles, not proceeding to downtown Brampton via Main Street. The new LRT would run from Gateway Terminal (Steeles Avenue) to Port Credit GO, via a loop around Square One.

Council has since rejected a tunnel option, and has tentatively championed alternative routes using Kennedy, McLaughlin, or the Etobicoke Creek Valleylands.

The Toronto Region Conservation Authority, who owns and manage the Etobicoke Creek watershed, voted unanimously in May 2016 to reject any proposal to build an LRT on those lands, either tunnelled or elevated.

In June 2016, city council voted to proceed with pre-EA LRT work for Kennedy and McLaughlin, specifically to draft a Terms of Reference.

Metrolinx released the Request for Qualifications in October 2016 for the Hurontario LRT. 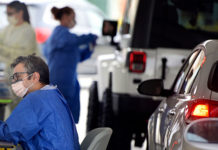