Bramptonist
Home News City Why LRT Is Good For Brampton 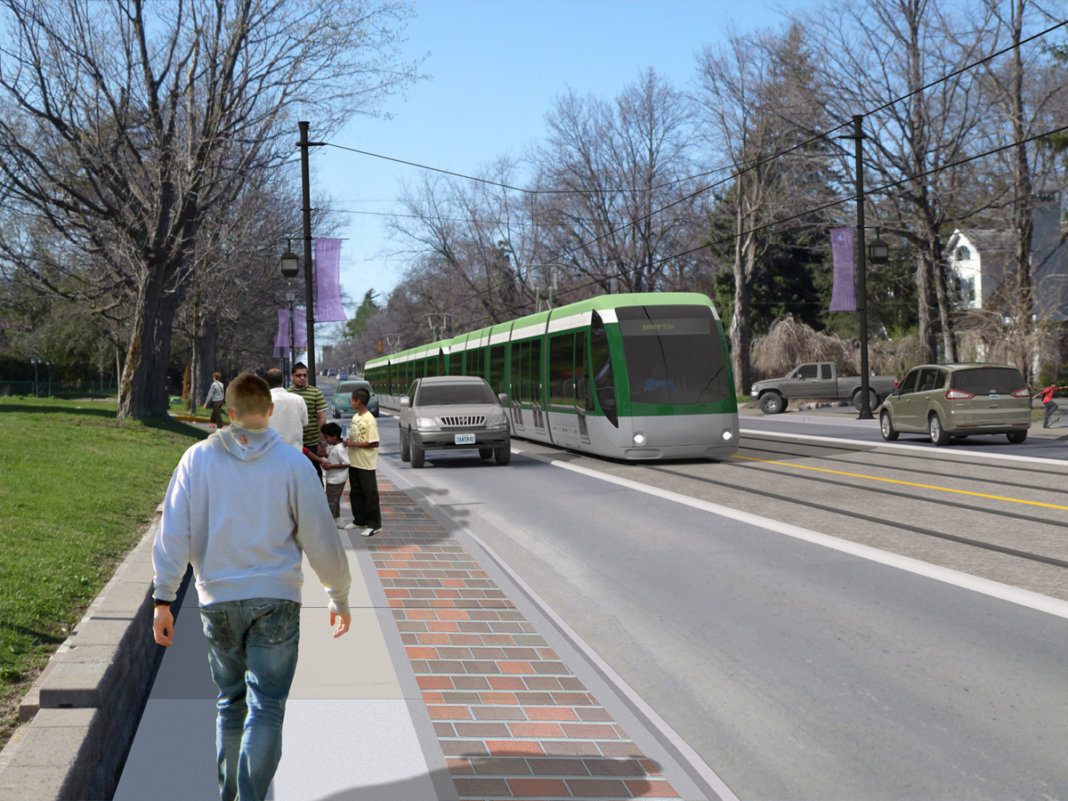 Some History on Transportation Infrastructure in Brampton

Transportation infrastructure has historically played a significant role in Brampton’s development. Settlement in Brampton was initially slow because it “could never sustain large-scale milling operations” due to the slow movement of the Etobicoke Creek. This changed in 1856, when the Grand Trunk Railway constructed a rail line to what was then the village of Brampton. In 1873, just under 20 years after the arrival of the railway, Brampton was incorporated as a town. The railway continued to bring new business into the town throughout the early 20th century.

Brampton saw a decline in local business as a result of the Great Depression and 2 World Wars. After the second World War, cars changed how Brampton would continue to grow — as a suburb of a rapidly urbanizing Toronto.

According to 2011 census data, Brampton has grown to become the 9th largest city in Canada, with up to 600,000 residents. In the next 20 years, the Region of Peel will need to accommodate over 300,000 people and approximately 150,000 jobs. Commute patterns have expanded. More people are moving between Brampton and Toronto, Halton and York Regions, as well as within Peel. Where transportation modal share is concerned, the car is still king, comprising 87% of all trips. To say traffic is a problem is an understatement. But, transit use has also increased. ZUM Transit has demonstrated that residents appreciate efficient public transit. Brampton Transit is projecting 20 million passengers for 2014, and ridership continues to increase.

So, what’s the problem? A key idea to consider with transportation planning is induced demand. It’s the phenomenon that after supply increases, more of a good is consumed. Translated: When roads are widened, more people use it. For example: Our 410 highway is receiving an expansion. While this will temporarily address the current demand on the highway, this will also encourage more people to use the highway. As Brampton continues to grow, the highway will attract more people who want to drive on it. That means more cars needing accommodation on our arterial roads also, exasperating the problem of traffic in our city, not solving it.

Widening our roads will not address long-term gridlock problems. What the 410 widening tells us is that there is demand for capacity between Brampton and Toronto/Mississauga. We need to use existing corridors better. We need new, more efficient transportation infrastructure. Transit Orientated Development, and specifically an LRT for Hurontario-Main, is a better solution.

I apologize in advance, but it’s time for some Math: Let’s talk about capacity. A 3-coach LRT compliment holds 600 people, compared to an articulated Brampton Transit ZUM that holds 80. Combine that with a right-of-way, that means moving more people, faster, and more reliably, compared to our current ZUM system. Not having to worry about merging in and out of car traffic means less worries about traffic delaying transit.

Where many people have a small freak-out is at the thought of removing a lane for cars, to build a lane for LRTs. Relax, the math doesn’t support cars.

Alright, so an LRT is a better use of road space to move people. Why is it better than a highway? In a 2010 survey, the average peak number of (presumably single occupant) automobiles using the 410 was about 7,500 per hour, a small amount more than a single LRT route. Consider for a moment how much space the 410 requires to accomplish moving that many people, and how many more people LRT lines could move in the same space. Once one LRT line is in place, it becomes a catalyst to build more. How awesome would it be to have an LRT running along Queen St. to the Bramalea City Centre? To York University?

The thing about LRT, and Transit Orientated Development, is that it does a whole lot more than just move people. It promotes development of a variety of businesses. A highway requires a system of on-ramps, off-ramps, and entrances into parking lots. But with an LRT, people can exit and walk to a destination at street level more easily. This creates convenient connections to jobs, restaurants, clubs, coffee shops, and any number of places to spend money and grow the local economy. It also creates easier transfers between transit systems, like GO Transit, without having to find parking. People who walk to their final destinations likely prefer attractive spaces. The more successful businesses will be those where people enjoy spending time in the built environment. This provides a boost in land value as businesses compete to beautify their spaces to get your money.

People like living near a subway, streetcar line, or a bus route with quick access to a dedicated transit line. People do and will want to be near the LRT. As Brampton grows, people who want to live near dedicated transit will move within easy access to it. Each resident who chooses the LRT over a highway will be one less car to worry about adding to our already congested commute.

An LRT would give Brampton a huge boost. Why wouldn’t we want that?