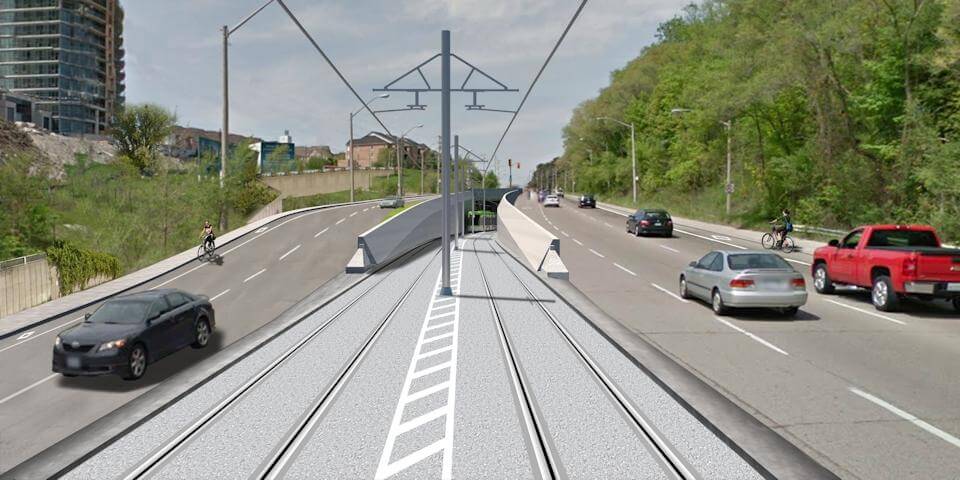 Above: Proposed Laird tunnel portal on under construction Eglinton Crosstown LRT. The Main Street tunnel may be similar. Source: Metrolinx.

A planning report released late on Friday reveals Brampton city staff are recommending two tunnel options for the extension of the Hurontario LRT north of Steeles Avenue, after council previously rejected a surface alignment. Both options would cost the city at least $400 million, likely with no provincial funding.

Last April, the Ontario provincial government provided a full $1.6 billion in funding, including contingency costs, to Brampton and Mississauga to build the Hurontario-Main LRT, a fully studied surface rapid transit line from Port Credit GO in Mississauga to the Downtown Brampton GO Station.

Last October, however, six councilors voted against the full line and voted to sever it at Steeles Avenue. Council asked staff to come back with alternative north extensions. The province and Metrolinx have since told the city that any new north extension must come solely from the city’s budget.

Staff have come back to council with two recommendations for a tunnel north of Elgin Drive to the Downtown Brampton GO station. The difference between the two options are the placement and number of stations. At some point in the process, the extensions have lost the surface stop at Charolais, which was previously recommended.

The Etobicoke Creek valley route, as well as routes on Kennedy Road, McLaughlin Road, and the OBRY railway were rejected due to impacts on the environment, impacts to employment lands and stable neighbourhoods, and constraints on operating an LRT on a railway that operates freight trains during the day.

Tunnel Option #2 would cost $410 million. The LRT would dive underground north of Elgin Drive. It would include a surface stop at Elgin Drive and single underground station in Downtown Brampton, where the north end of the station box would be at the GO station and the south end near Garden Square.

The cost for the Transit Project Assessment Process and other related studies would cost $2.5 million and would take around 2 years to complete. The funding for the report will have to be taken from the city’s General Rate Stabilization Fund.

A Special Meeting of Planning & Infrastructure is scheduled for April 18, 2016 at 7:00 p.m. for public participation. However, it should be noted public delegations are allowed at all regular council and committee meetings and members of the public may wish to delegate on March 7, 2016 at 7:00 p.m., when this report is brought to the Planning and Infrastructure Committee.