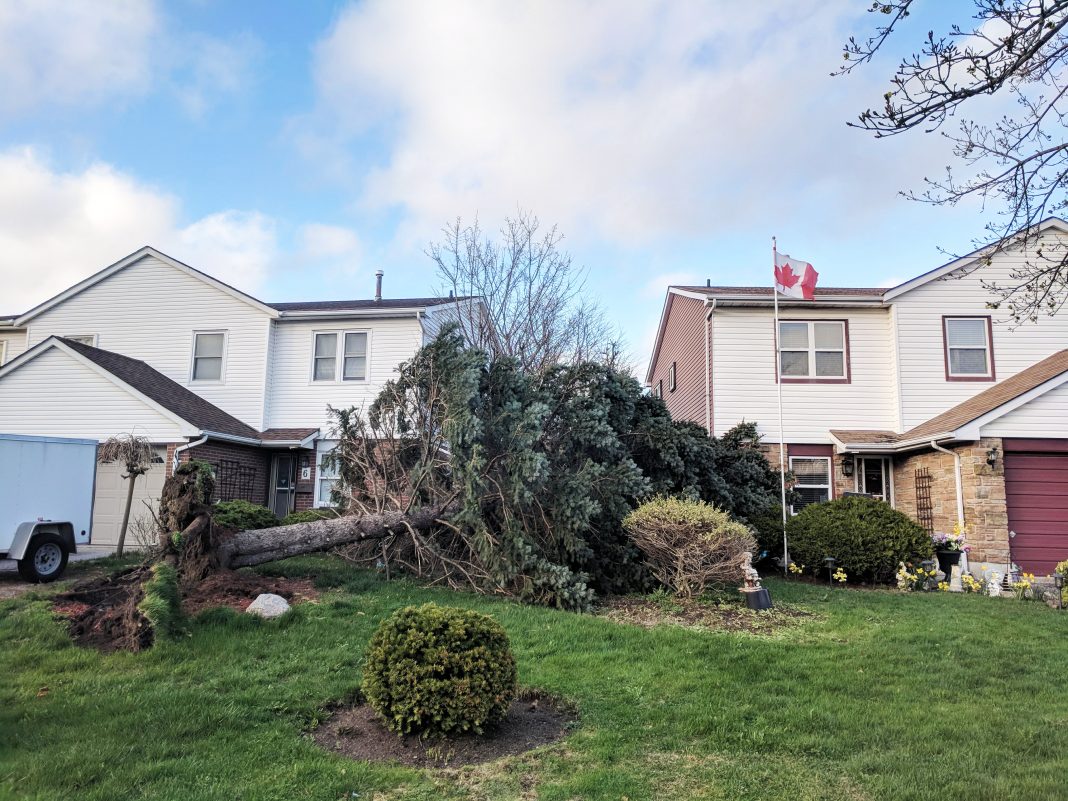 A wind storm hit Brampton Friday afternoon causing all sorts of chaos. Trees are down in neighbourhoods across the city, garbage cans are strewn in the streets and downed power lines have caused outages.

Timber!!! Tree down in our back yard !! #windstorm #brampton pic.twitter.com/onTYRQ9OLy

Environment Canada issued a wind warning Thursday evening for much of Southern Ontario predicting wind gusts around 90km/h. The agency warned that considerable damage could be done by uprooted trees and loose objects flying into the air.

This is the second wind storm to occur in the area in just a month. In April gusty weather hit the GTA causing damage to homes and knocking out major power lines. It left thousands of people without power and wreckage in multiple GTA cities.

Friday afternoon’s storm has done a number on Brampton as well. Trees uprooted in neighbourhoods, both old and new. Trees have also fallen into some major roads, including Main Street and Bovaird Drive, effectively blocking traffic.

Residents are also reporting damage to roofs and in some cases windows too.

My family in Brampton is fine, we're under an extreme wind alert which up rooted my sister's tree in her backyard destroying her shed & possibly her fence bordering her neighbors backyard @IDontNeedAMap84 pic.twitter.com/3Sw5foi7gO

Viewer Ryan Erskine just submitted this picture of a tree that has completely fallen over in Brampton. @AnthonyFarnell @globalnewsto #ONStorm pic.twitter.com/IwiLdhG0ng

The storm has even grounded flights in and out of Pearson International. Officials confirmed Friday evening that a ground stop is in effect, meaning no flights are currently landing or departing.

Alectra Utilities is in the process of deploying crews to the area to deal with outages caused by the high winds. The company offers updates on their website and residents can track how long outages are expected to last.

Wind gusts may slow down but Environment Canada says that that the strong winds could stick around into Saturday.