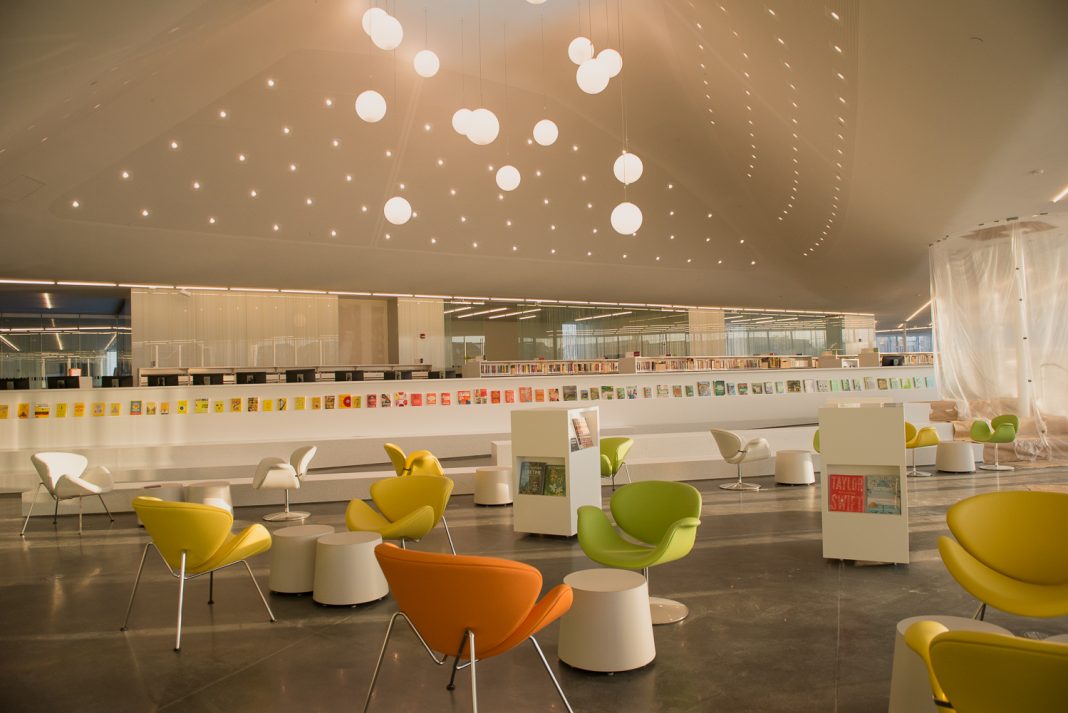 One of the first things you’ll notice when entering the new Springdale Library is the amount of natural light welcoming you into the space.

Designed by RDH Architects, the same firm behind the award-winning Williams Parkway Operations Centre, Brampton’s newest public library continues a trend of city buildings that are both beautiful and functional.

The newest library branch is 20,000 square feet, plus 5,000 square feet of city-owned community space. However, the floor-to-ceiling windows and the high ceilings make the space seem bigger on the inside than one might expect.

From the outside, the building looks like something out of a science-fiction movie, with gleaming stainless steel and LED lighting tubes, like an alien spaceship has landed in the city. One library staff member commented that others have said it looks retro-futuristic.

The windows are covered in a solar-responsive ceramic frit, meant to mimic the pages in a book; the pattern technique also helps to reduce glare, and to minimizes solar transmission, which means that despite the amount of sunlight entering the building, it won’t get as hot as a greenhouse.

The library is a LEED Gold standard building, with environmental features such as electric car charging stations, geothermal heating and cooling, grey water systems (splash pad water is diverted to water the gardens), and a green roof.

Construction wasn’t even finished when the building won a 2015 Canadian Architecture award for Design Excellence. Once enough of the public has been inside to see it, the Springdale library could be a top contender for the most beautiful building in Brampton.

Unlike the isolated Gore Meadows branch, the new branch is in the heart of the established Springdale neighbourhood. It is within walking distance from several schools and located on or close to two major city bus routes. It’s easy to imagine families visiting the library after grocery shopping and running errands. 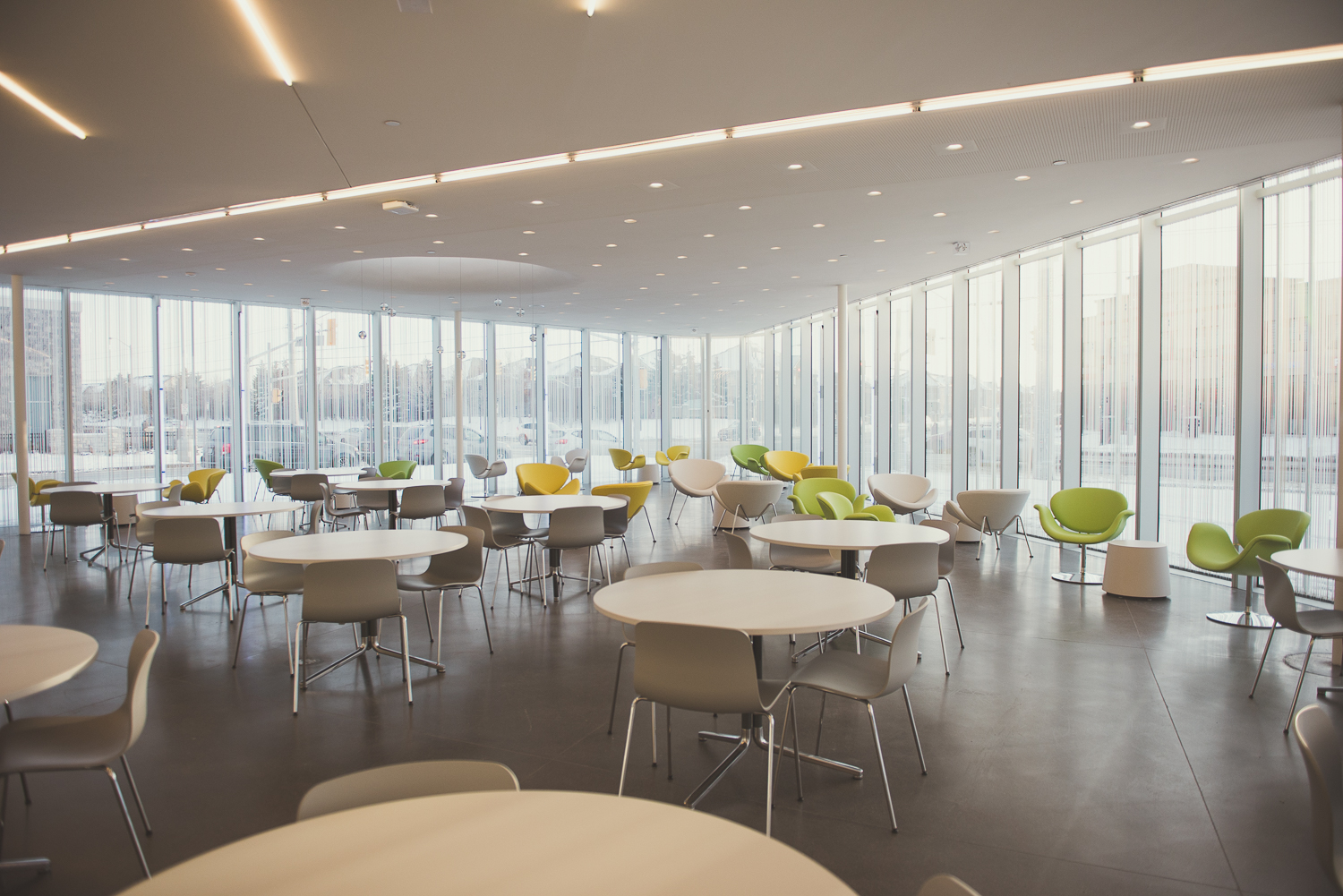 The unusual pyramid structure is different, but easily accommodates everything the library needs and more. This is what a modern library looks and feels like.

What to Expect When You Visit

When you enter, there’s a lounge-like space that looks out onto a contemplative garden. A spectacular skylight floods the space with natural light. A long desk where one can work on a laptop or read a book, overlooks this lounge, unlike other branches where these activities are pushed off to the sides.

On one side of the pyramid, there’s the adult fiction and non-fiction section. Nearby is the Brampton Library system’s third Makerspace, with two 3D printers, laser cutters, and a computer with audio-recording equipment.

Another corner features a new open community space; the library hasn’t finalized the primary use of the space, but staff have suggested it could be used during March Break for drop-in activities, an indoor lounge for seniors, or possibly an after-hours study space for students when the library itself isn’t open. 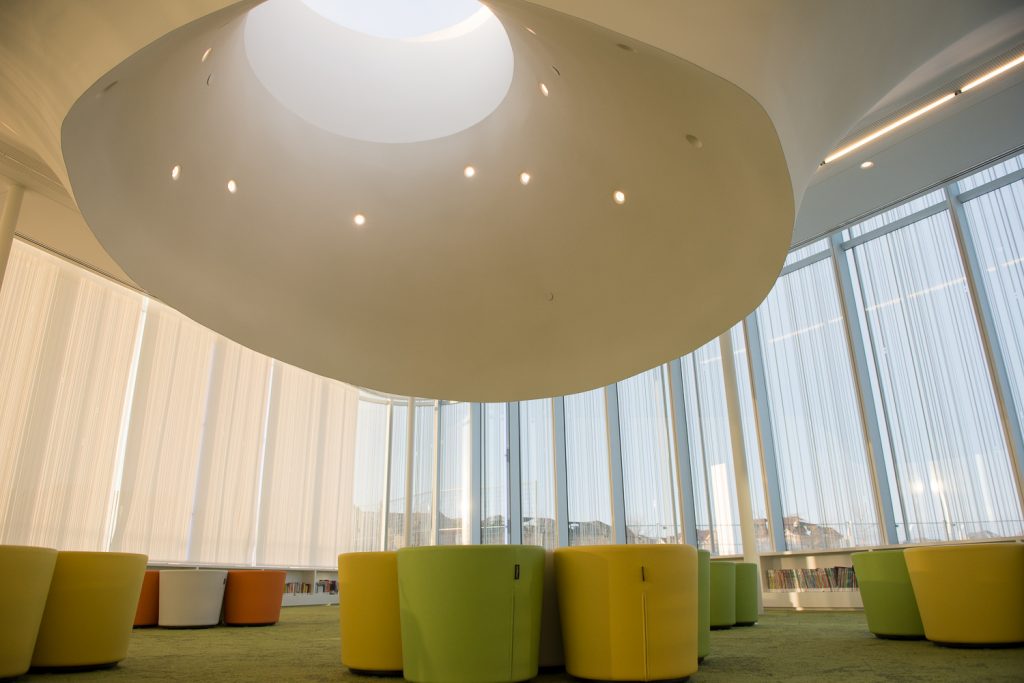 In the final corner, there’s the children’s section, which is the most child-friendly space in a city building in Brampton. This section is close to the new Komagata Maru Park, and the carpet is green like grass. Child-sized versions of the furniture keeps it connected thematically to the rest of the library, while the ledges surrounding the space also have books in them so that even the smallest kids can pick up a book. There’s even a mini-version of the main skylight, establishing that while this is the children’s section, it doesn’t have to be designed differently.

The best new feature in the library has to be the giant Everbright wall, where anyone can twist the knobs to change colours, making pictures and words.

Regarding the new Komagata Maru Park, it has standard playground equipment as well as a new splash pad. Everyone who has passed the library in the past few months has wondered about the giant “I”, “A”, and “E” letters. It’s not related to the name of the park but is inspired by the library itself. You’ll have to visit to discover what it means, but here’s one hint: look for more letters in the park.

The new library cost the city $17 million, and was originally supposed to open by summer 2016. However, due to a delay in tendering the contract, this date was pushed to March 2017, and eventually to its opening this week.

The Brampton Library Springdale branch is located at 10705 Bramalea Road, about 500 metres north of Sandalwood Parkway. There is parking, including electric car charging spots, and Brampton Transit route 15 Bramalea stops directly outside. The library is open every day.