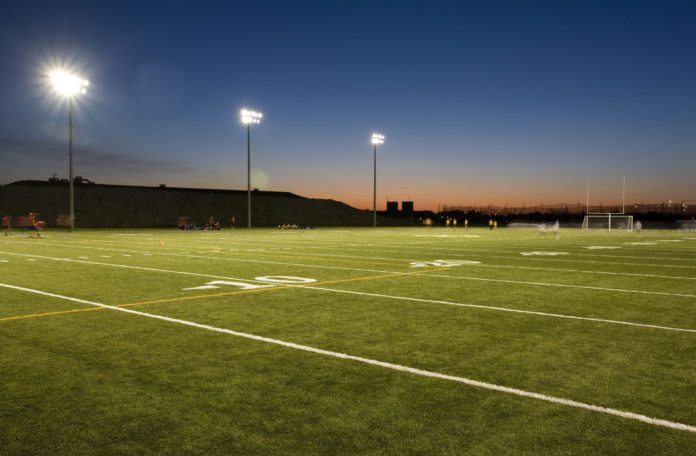 The Peel District School Board (PDSB), in partnership with Ottawa-based Footy Sevens, is set to overhaul the school’s sports field, replacing it with new artificial turf. New LED lighting, fencing, and renovated bleachers are part of the project.

The costs of the $2 million renovations are mostly being financed by Footy Sevens, who will manage non-school hour usage of the field, renting it out to sports leagues and community groups.

Chris Surgeoner, Partner with Footy Sevens, revealed more details: “As well as the 6-lane athletics track, the artificial turf field will be lined for full-sized fields for a variety of sports as well as four smaller-sided soccer fields that are separated by [a] removable divider netting to allow four different games or groups to be using the field at same time.”

Heart Lake, being a certified “ecoschool,” will also benefit from an environmentally friendly LED lighting system.”[The] custom designed LED lighting layout will use a fraction of the energy that traditional halogen floodlights would use and the bulbs last much longer, so it’s a very green solution to lighting the field,” Surgeoner explains.

“It concentrates the light where it needs to be to avoid light pollution and is completely controllable to allow different fields and sections to on or off as required as well as varying the lighting for different times of days or usage types.”

Footy Sevens will be in charge of the design, construction, as well as on-going maintenance costs for the field.

The PDSB will only have to pay to resurface the existing walking and running track with a synthetic surface.

Construction begins in April, and won’t finish until August.

Suzanne Nurse, PDSB Wards 2 & 6 school trustee, says the project “will mean a great deal to the students and staff, and I know that the benefits will extend well beyond the school into the community.”

Artificial turf projects in the GTA often run into concerns and protests from residents or existing users. A Ryerson University proposal was killed after pushback and a University of Toronto proposal went ahead amid campus backlash.