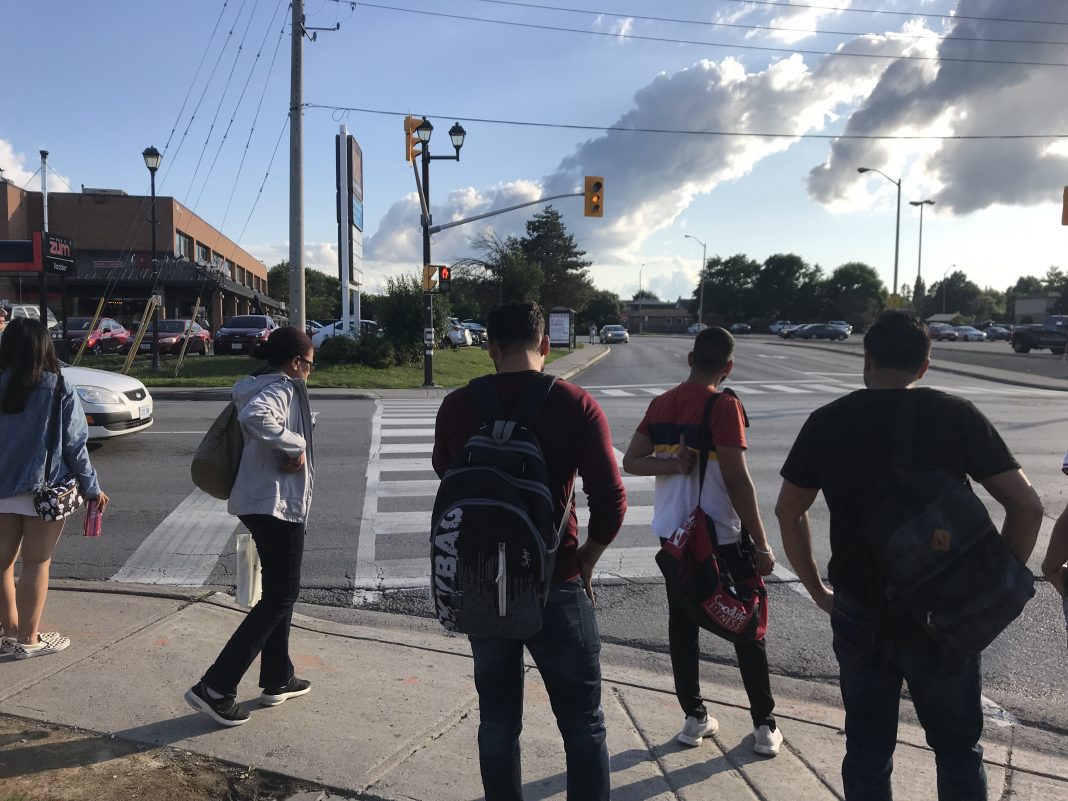 With consistently high ridership growth over the last few years, Brampton Transit has proven to be one of Canada’s greatest transportation success stories. The Flower City has proven that transit can be successful and popular in North American suburbs. However, transit can only be really successful if it is easy to access. Here, Brampton has failed miserably.

Whether we drive, cycle, or take public transit, there is one thing that unites us all: we are all, at one time or another, pedestrians. No matter our age, income, or physical ability, whether we run, walk, or wheel, the way we design urban streets and pathways matters. Pedestrians are the most vulnerable road users, but sadly, we take our lives in our hands when we cross the street, even when we have the full right-of-way, and take all due precautions before crossing. We are not even fully safe on the sidewalk, or even in our own homes from inattentive, impaired, or reckless motorists.

Walkable City Rules by Jeff Speck (Island Press, 2018), includes dozens of tips on how to make cities better for cyclists, transit users, and especially pedestrians. Some of these tips are quite easy to implement, while others require rethinking city infrastructure and architecture. Speck has contempt for infrastructure that prioritizes motorists over all else.

In Brampton, at nearly every intersection, pedestrians must push a button to cross at an intersection. Meanwhile, Speck argues that “pedestrians shouldn’t have to ask for a light.” Pedestrian push buttons, also known as “beg buttons,” are installed with the expectation that all road users will be in their personal cars, and as such are “almost entirely the wrong solution” by making pedestrians second-class citizens in their own cities. Speck argues that these buttons do not make any sense at signalized intersections where pedestrians frequently cross.

Crossing at Main and Vodden

The intersection of Vodden and Main Street, just north of downtown Brampton, illustrates these points. It is at the junction of five Brampton Transit routes, including the busy 502 Züm Queen, and two GO Transit bus routes. It is not an especially busy transfer point, nor is the area densely populated. But with the bus stops, grocery stores, restaurants, and shops in the area, hundreds of pedestrians pass through here on any given day.

The No Frills and parking lot on the northwest corner and Kingspoint Plaza (Giant Tiger) on the northeast corner are prime redevelopment lands, within walking distance of the Brampton GO Station.

Neither Vodden nor Main Streets are especially wide by suburban standards. Vodden is only four lanes across, and Main is five lanes across. Compared to many roads in Brampton (like Steeles or Bovaird, both busy truck routes), Vodden and Main Streets should be relatively easy to cross on foot. Sadly, that’s not the case.

Traffic lights are timed to favour north-south traffic over the traffic crossing east-west, and pedestrians must beg to cross the street. While there’s plenty of time to cross Main, pedestrians are only given a short window to do so legally. On a regular weekday afternoon, traffic is given two minutes of green light time in the north-south direction, with anyone intending to cross Main Street having to wait even longer. If a pedestrian doesn’t push the button in time, they may have to wait four minutes to cross. That just serves to frustrate anyone trying to catch a bus on the wrong side of the street.

If the beg button is pushed in time, the walk signal will appear for just seven seconds before the countdown begins, giving 11 seconds to cross five lanes. After that, the light remains green for an additional 45 seconds before changing to amber.

In the video below, a southbound Route 2 bus clears the intersection just before the light changes. It takes a few seconds for passengers to get off the bus and reach the crosswalk, just as the “don’t walk” sign appears. Yet there’s plenty of green signal time for motorists to continue along Vodden. Had the walk signal remained on until 11 seconds before the light changed, there would have been plenty of time for those passengers getting off the bus to cross legally. In fact, you’ll see a pedestrian waiting to cross legally. Had the countdown lasted longer or started later he’d have had plenty of time to do so within the confines of the law.

Crossing at McMurchy and Steeles

At McMurchy and Steeles Avenues, the Züm bus stops are both located on the east side of the intersection, yet pedestrians are banned from crossing on the east side. This is for no other reason than to maximize vehicle throughput through the intersection, as Malta Avenue, on the south side of Steeles, does not have as much traffic as McMurchy Avenue does to the north. Pedestrians crossing to get to the Züm stops would only be in the way of left-turning cars. The upshot of this arrangement is that pedestrians must have to cross the street up to three times (and beg to cross three times) to get to their bus stop.

But we have a duty to make walking as safe, comfortable, and easy as possible, not just to protect vulnerable road users, but also to promote healthy and environmentally sound transportation, including transit.

If Brampton wants to continue Brampton Transit’s success, it can start by removing beg buttons at all Züm stops to start, as well as any other transfer point. There’s nothing worse than waiting four minutes to safely cross the street to watch your bus pass by.