Bramptonist
Home News Arts & Music Plenty of To-Do About Something: A Review 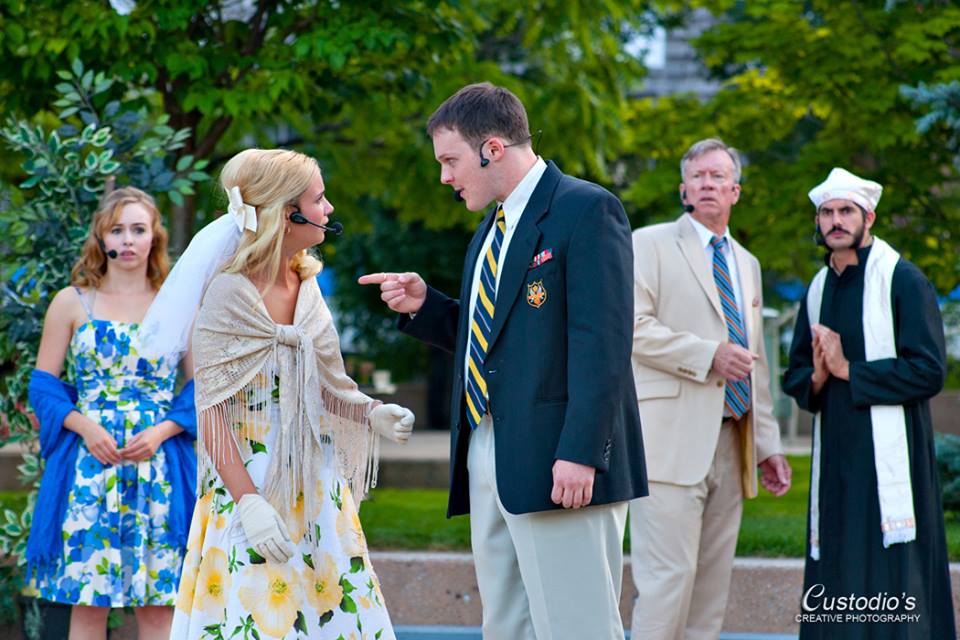 Two couples. One pair so ardently antagonistic toward one another that they only need the scheming intervention of their friends to realize they’re in love. The other couple are happy to announce their love—and their engagement. Until, that is, the best man’s brother, jealous of his sibling’s popularity, tricks the groomsmen into believing that the bride is sleeping around, and all their acquaintances join in slut shaming the innocent victim. Nearby, a constable whose bungling of his job is matched only by his bungling of the English language and his misdirect ions to his minions ultimately save the day.

Is this a new summer TV drama or movie? No, it’s the original source material for so many modern stories—Shakespeare himself. In this case, Much Ado About Nothing, one of the Bard’s most popular comedies. 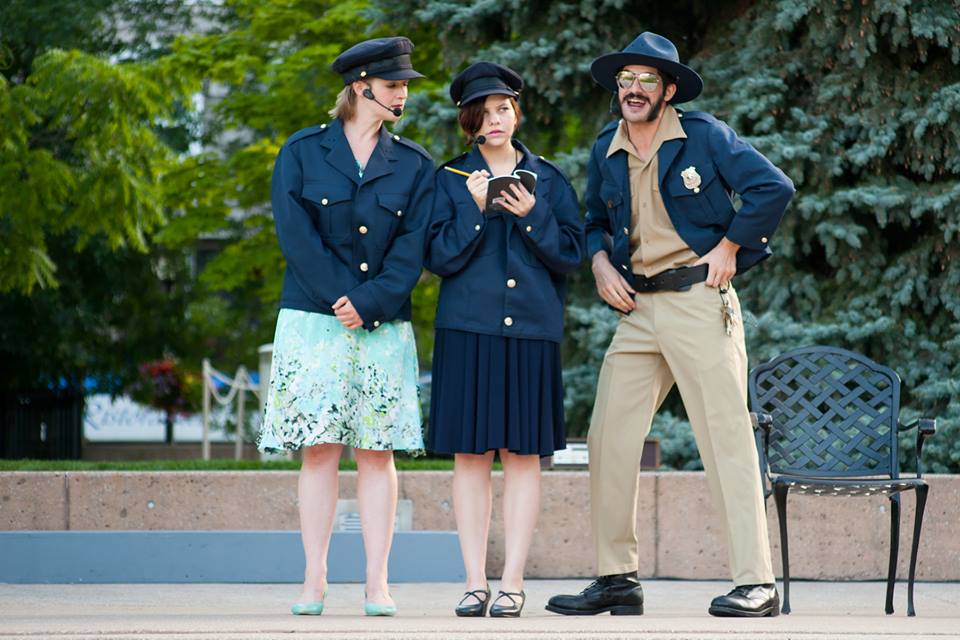 If your only experience with this theatrical staple has been high school English class, if you’ve never attended a performance and you’re wondering “Is Shakespeare still a thing?” then this version of Much Ado is for you.

The company has done much to create an accessible play that will be enjoyable for audience members who are new to Shakespeare. They offer a shortened version of the original play, so the performance certainly doesn’t lag. The play has many comic scenes and moments of slapstick and physical comedy. But the romance and drama also engage the audience.

The actors “break the fourth wall” between themselves and the audience several times to keep the audience directly engaged with the action. At one point, for example, Benedick comes right into the audience and sits among the audience members as part of his scene.

At the mid-way point, all of the cast come out and take questions from the audience, to make sure everyone is following the story. In the performance I attended, in response to a question, two of the actors provided an overview of one of the plot points by improvising the scene in plain English. So, if you’re new to Shakespeare, you’ll have a chance to clarify anything you don’t understand. But if you’re a long-time fan, you can ask more in-depth questions and the actors are up for that too.

The setting of this version of the play is ostensibly the 1960s—it’s a tradition to set Shakespeare productions in different time periods, as a way of updating the play. The wardrobe is wisely quite timeless, other than evoking upper class and twentieth century. And the company has made the most of the staging possibilities offered with Ken Whillans Square, which seems made-to-order for staging a play. 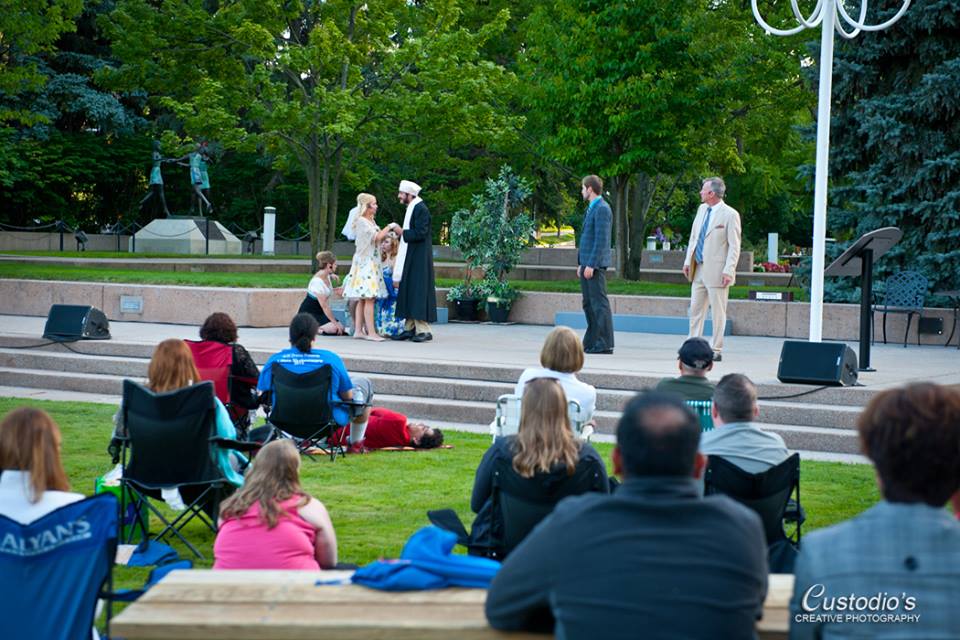 Much Ado About Nothing is one of my favourite Shakespeare works, so I was concerned before seeing the play about the effect of condensing the text. But there’s little cause for concern. This shorter version will be enjoyable for first-timers and long-time Shakespeare lovers alike.

The performances are nicely rendered. Shakespeare wrote the character of Dogberry, the master constable, as an over-the-top comic character, and Roberto Ercoli’s gleeful physical comedy and cacology garners many of the evening’s laughs. Sam Piper as Beatrice and Josh Wiles as Benedick possess sufficient acting range to garner laughs during their battles of wits and believable romance, pathos and outrage as storylines progress. From leading roles to minor characters, the acting is consistent and effective. A list of the cast can be found at the end of this review.

On the evening I attended, the audience comprised families with children, as well as people who were clearly knowledgeable theatre goers. In the group who attended with me, some people had never been to a Shakespeare play before and others of us are regulars. We ranged in age from Gen Z to Baby Boomers. And when we debriefed after the performance, we had all enjoyed the play, the acting and the overall experience. We all agreed we’d recommend it to others.

For families, this performance would be a great way to introduce children to Shakespeare. The relaxed, outdoor environment is ideal—as is the humour in the play and the free admission. On the other hand, if you’re a Shakespeare enthusiast and you’ve attended other outdoor performances, you’ll enjoy contrasting and comparing the merits of this version. 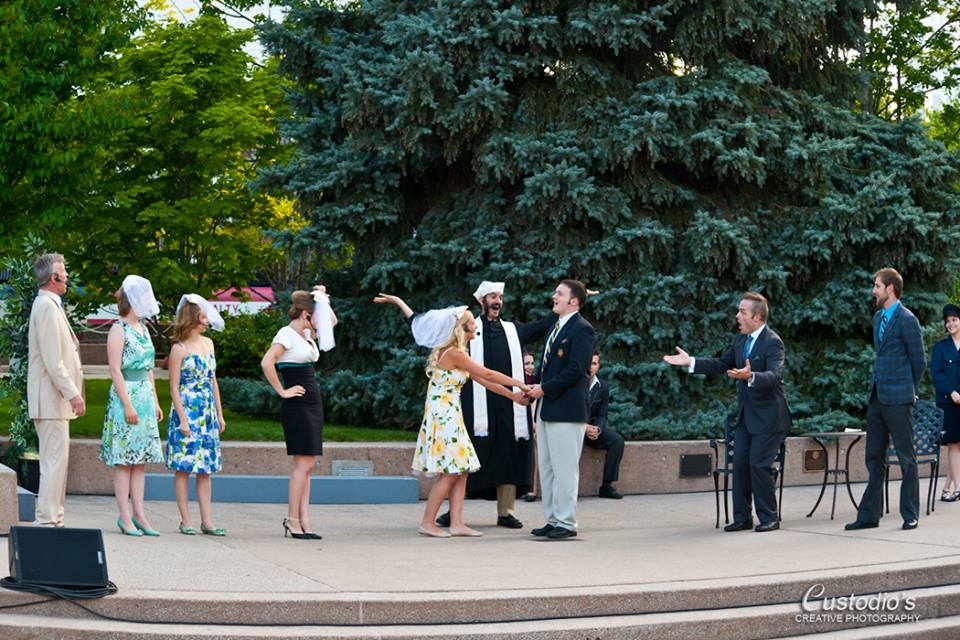 Within 70 minutes, you see friendship, courtship, romance, love, laughs, pratfalls, drama, sibling rivalry, betrayal, conspiracy, mystery, tragedy, death, redemption, reconciliation and a happy ending. Much ado? You bet. This play has something for everyone.

Shakespeare in the Square is presented by the Rose Theatre. Performances run Wednesdays & Thursdays at 6:30 p.m. until Aug. 20 in Ken Whillans Square (in front of City Hall). Free admission.