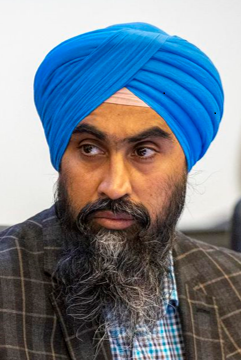 This article has been updated to include Councillor Williams speech on the matter at the August 5, 2020 Council meeting.

Brampton is once again making headlines.  However, this time, for all the wrong reasons.  Across Ontario, municipal Councils are pointing to Brampton regarding the sexual-misconduct case involving Councillor Gurpreet Dhillon.  The renewed debate was prompted by the ongoing Government of Ontario’s consultation with municipalities on what to do with a Councillor who engages in unacceptable behaviour.

The Brampton case has even reached across Canada, whereas reported by the CBC, the Government of Alberta is also determining how to remove elected municipal Councillors from office for violating Code of Conduct policies.

The victim, a Brampton business woman, managed to record the incident.  On her cell phone, the complainant could be heard saying “No” to Councillor Dhillon 74 times, as he picked her up and lifted her skirt.

In response, the Brampton woman has commenced a $2 million civil claim against Councillor Dhillon.  Police services have not investigated the incident as a sexual assault because the alleged events occurred in Turkey, where Canadian authorities have no jurisdiction.

Brampton City Council has requested Gurpreet Dhillon resign.  Councillor Dhillon has denied the allegations and continues in his role.

Citing this case, and an incident in Ottawa involving another Councillor, Liberal MPP Stephen Blais has introduced the Stopping Harassment and Abuse by Local Leaders Act.  The proposed provincial legislation would allow municipal Councils to direct their Integrity Commissioner to make a motion before the courts to remove a Councillor for failing to comply with the municipality’s workplace violence or harassment policies

He introduced the proposed law on International Women’s Day.

“Harassment and violence have no business in the workplace, and certainly no business around the municipal council table,” says MPP Stephen Blais, “In any other work environment individuals would lose their job for these types of behaviours; municipal Councillors must be held to that same standard.”

According to Blais, “Surely everyone can agree that there are some actions so egregious, such as workplace violence and harassment, that would warrant losing your job,” he adds, “We need to give municipalities all of the tools available to protect employees from this kind of treatment.”

In response, on March 5th the Ford government launched consultations with the municipal sector to strengthen accountability for council members. The province wants to ensure that Councillors and heads of council maintain a safe and respectful workplace and carry out their duties as elected officials in an ethical and responsible manner.

“We want to gather input to ensure there are adequate mechanisms in place to hold council members accountable for any unacceptable behaviour,” said Steve Clark, Minister of Municipal Affairs and Housing. “It’s critical that everyone feels safe and respected in the workplace, and that they know there are accountability measures in place for members who violate codes of conduct.”

Within the investigation completed by Brampton’s Integrity Commissioner, it was reported that the complainant said “no” 74 times in response to the “inappropriate sexual misconduct” of Councillor Gurpreet Dhillon.  This included Dhillon picking up the woman and lifting her skirt.

“I would recommend that Councillor Dhillon be dismissed from his role”

Having reviewed all the evidence, including Dhillon’s responses to the sexual harassment complaint, the Integrity Commissioner concluded:

The City also recognized the limitations of the Municipal Act in considering penalties permissible for a Council member violating city policies.

In response to the report, Brampton City Council unanimously accepted all of the Integrity Commissioner’s limited recommendations, which included: suspension of pay for 90 days, issuance of a formal reprimand to Dhillon for his conduct, and issue an apology to the complainant on behalf of the City.  City Council also unanimously supported that Dhillon be removed from all city committees, suspended from all city business travel outside the province, and restrict his access to municipal offices.

In a symbolic and passionate speech, Brampton Councillor Charmaine Williams asked Dhillon to “resign” 74 times. This is the same number of times his victim said “no” in a recorded tape.

And furthermore, given that Dhillon is also a Regional Councillor, City Council unanimously supported sending the report to the Regions of Peel’s Integrity Commissioner.

Finally, given that Council cannot remove an individual from office for violating city policies, Brampton Council unanimously asked Gurpreet Dhillon to resign.  In response, Councillor Dhillon refused.  He disputes the allegations and the investigative process.

If provincial legislation is passed, then perhaps Dhillon may finally be forced to address the allegations in court.

In the interim, Gurpreet Dhillon continues in his role as a Councillor.