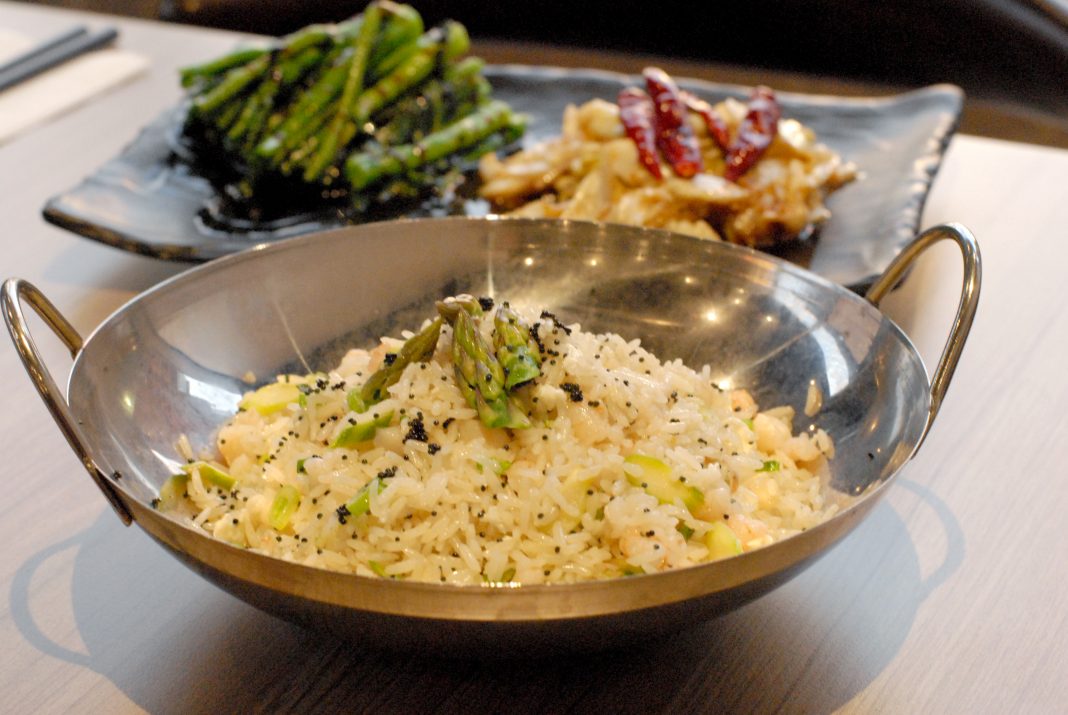 Michael Cheung, in partnership with the owners of Golden Star Chinese Takeout, recently opened the restaurant, 9 Queen. Within two months of opening, they have gone through three different iterations of a pan-Chinese menu.

The page-long menu is an accumulation of Cheung’s favourite dishes from living in Shanghai and Beijing for six years. Through the mentorship of well-known Ossington Street chefs, the dishes and drinks were crafted with flavour and interest using those traditional flavours Cheung loves and a mix of Canton, Hakka and Northern Chinese flavours that come from his roots.

The emphasis at 9 Queen is aromatics. Regardless of a simple blanching or a sweet heat sauté, many of the ingredients emphasize smell and essences to enhance the flavour of every dish.

We went twice to 9 Queen due to the menu changes. There was a significant improvement to the food and menu on the second visit and the restaurant continues to tweak its flavours based on innovations and customer preferences.

The most popular dish since opening day is the OGT (Original General Tso) Chicken. The dish was invented by a chef from the Hunan province of China; but the original version was heavy, sour and hot.

9 Queen’s rendition resembles the old, but with a new twist. The chicken h an amazing crisp without being over-battered, only a hint of sweetness, a smothering of sesame seeds and fragrant chilis.

Fish, shrimp and calamari, thinly coated and fried, make up the Pepper Salt Trio, and it’s delicious. 9 Queen puts its chefs to the task to fry the seafood delicately and with precise procedures. The trio is topped with green and red pepper, , green onion and garlic. It’s very flavourful and has an unexpected heat.

In honour of the Indo-Chinese lovers in Brampton, the chilli chicken wings — albeit not an actual Hakka dish — rivals some of the top wings in the city. It packs a punch of flavour and is unforgettable. The dry wing is freshly topped with peppers and green onions, garlic and the rest of the fixings, but the batter is seasoned beyond the salt and pepper with additional heat and a Szechuan flavour.

For the non-meat eaters, the Ying Yang Veggies and Three Earthly Treasures, along with the Naughty Buddha Fried Rice make for a substantial meal.

The Ying Yang Veggies, a Canton-style choy-sum, also known as Chinese flowering cabbage, is blanched and served with a soy-sauce dip. The flavours are mainly unaltered and the vegetables are left natural. The part of the dish is a Szechuan cabbage, stir-fried with peppercorn oil, and topped with dried red chilis.

The Three Earthly Treasures is a of eggplant, potato and green pepper. The potato is soft, the eggplant melts and the green peppers softens, but they’re all glazed with a savoury soy-sauce base and lightly crisped from the wok.

The restaurant’s drinks are just as creatively curated as it’s food. 9 Queen serves up a unique blend of bubble teas, including the Ying Yang (or called Yuen Yang) Black Milk Tea, which is hard to find anywhere else in Peel

The True Taro (taro bubble tea) uses real taro and is refreshing. It has a dominant taro flavour, but its less sweet than you’d expect. If you’re not of taro, this bubble tea is risky, but if you love it, you’ll enjoy this drink.

The Young Fei smoothie is an often-forgotten summer-time classic mix of lychee juice and rose petals. The drink is floral and and tastes exactly how it’s described. It also balances wonderfully with the vegetarian dishes in the restaurant.

9 Queen doesn’t have a liquor license yet, but they are working on it. In the meantime, they serve up cocktails named and curated after the four seasons.

Spring is light and floral with rosebud and syrup, a grapefruit soda (ting) and black goji berries. Along a similar wavelength is Autumn, a more citrus spritzer with yuzu, lemon juice, and longyan syrup, which bears similarities to lychee.

Summer is fun and edgy. Simply, it’s a pina colada base that’s been spiced with allspice and anise bitters. It’s also completely dairy free. Winter is for the adventurers, mixing rosemary and peach with a classic bitter in a fun spritzer.

9 Queen is a treat. The walls are beautiful, the design is refreshing and the food is appealing. The weekends are often busy so it’s always good to call ahead and make a reservation. Fortunately for downtown Brampton, a business neighbourhood marred with turnover, 9 Queen has been attracting its own diverse crowd and with good reason.