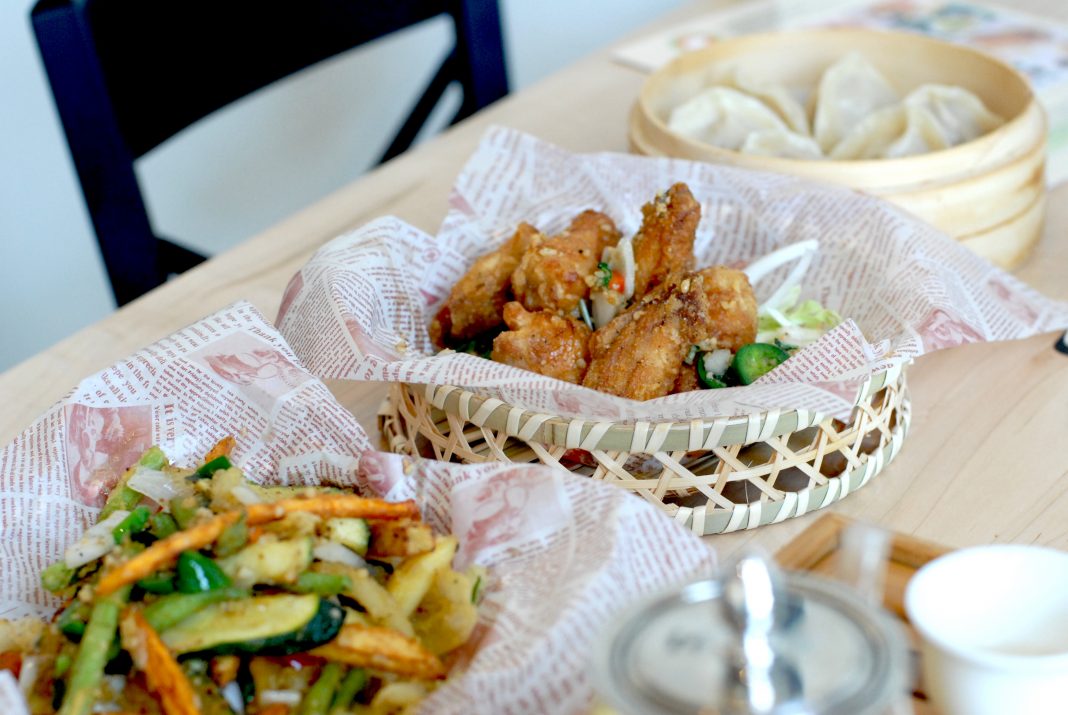 It’s the restaurant we didn’t know we needed until it came to Brampton. Green Bites Dumpling & Tea Bar is a beautiful yet casual northern Chinese eatery on Resolution Drive (near Steeles and Kennedy) by Lowe’s Home Improvement.

When you walk in, the ceiling is covered in large wicker lamps and shelf after shelf of ornate imported tea sets decorate the right wall. The right wall is adorned with rolling pins, traditionally used to flatten the dumpling pastry. All around are fully-bloomed purple and white orchids, and photographic art by the owners. The restaurant is peaceful and tasteful.

Green Bites Dumpling and Tea House was a two-year project that finally came to fruition in July thanks to David and Vicky Liu. Vicky is originally from Shanghai whereas David from Montreal, the city where they both met. He dreamed of opening a restaurant, and in doing so, the pair flew to California to meet David’s brother, a long-time chef whose restaurant has been operating for 18 years. They trained and studied his recipes thoroughly, and brought them back to Canada.

The way the restaurant works – order at the counter and take a seat. As it is a tea house, the teas ($2.95) are all Chinese classics – Spring Green, Dragon Well, Wuyishan Black, and others. The Iron Buddha tea (Tieguanyin) is a refreshing oolong tea with floral and fruity notes from the mountainous reason of Anxi.

Green Bites offers five types of dumplings, six to a plate. The shrimp dumpling ($7.95) is most popular – a full shrimp on the inside, sitting alongside a round morsel of ground pork and napa cabbage. Outside, the dumpling looks standard, albeit slightly bigger than normal. Inside, the filling is fresh – the juiciest meat, to the point of questioning if the dumplings are a fusion of meat and soup dumpling (they aren’t).

While the menu has lunch combos ($7.95 – that’s a great price) and dishes such as egg drop soup, basil fish, and grilled chicken in black pepper sauce, the two “Green Bites Must Order” dishes are Crispy Spicy Chicken Wings ($6.95) and Crispy Spicy Tempura Veggies ($6.95).

Yes, the chicken wings are crispy and slightly spicy. A thin layer of dredging covered the wing (we asked Vicky, but the recipe is a secret), and it was deep fried, topped with small pieces of minced garlic, jalapeno, onion and fried basil. The wings pack in a disproportionate amount of flavour, they are cooked perfectly, and it’s understandable why this is on the “Must Order” list. This is also served with “Dragon Sauce”, which is a mix of soya sauce, red chillies, scallion, coriander and garlic, among other spices.

The vegetable tempura was entirely elevated from what you might be used to at all-you-can-eat sushi places. Sweet potato, yam, long green beans, onions, squash and zucchini are also lightly dredged and quick-fried, and they are not heavily battered at all. After the quick fry, they are re-seasoned and topped with the minced garlic, onion and jalapenos. But in doing so, the flavour of the vegetables mix well with that of the tempura batter (once again, not sure what’s in that dredging, but it does seem to have pepper and star anise), and thus, you have a non-standard tempura with a unique flavour that has far more impact than the traditional delicate flavours of Shanghai or northern cuisine.

Green Bites has done an exceptional job in exploring flavour palettes and enhancing the Chinese food culture in Brampton. This restaurant is worth experiencing for its innovation in flavour.

Green Bites Dumpling & Tea Bar is located at 35 Resolution Dr #10, by Steeles and Kennedy. The restaurant is open every day from 11 AM to 9 PM. Follow them on Instagram here.