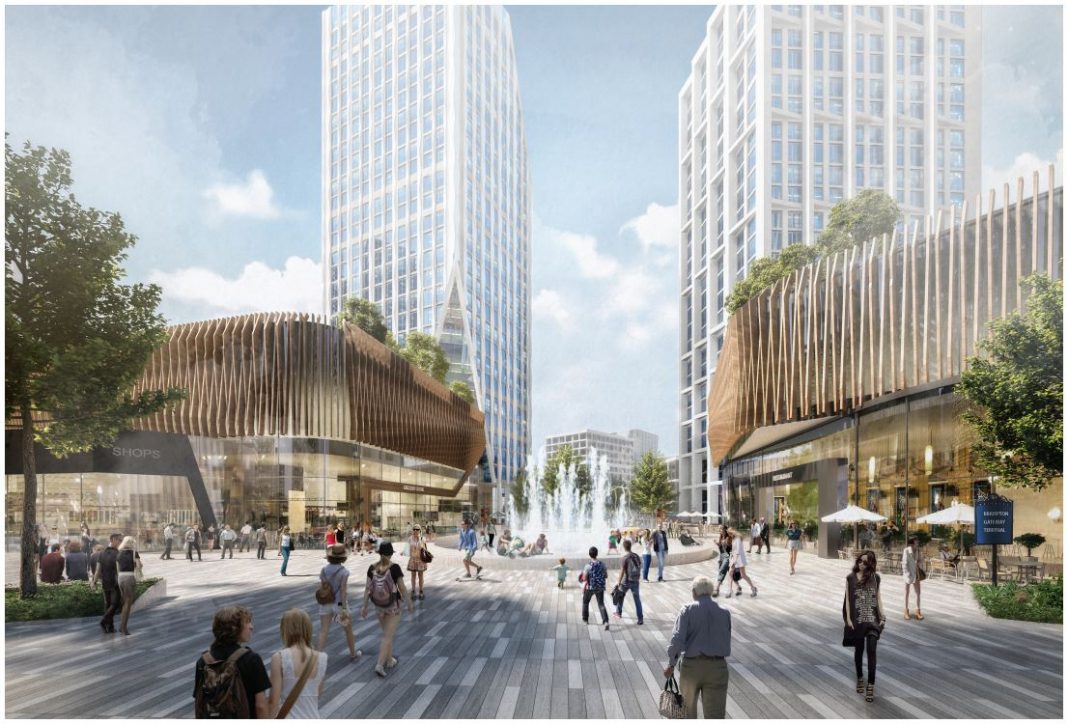 Moving west to east, Rio-Can has revealed its plans for the new Shopper’s World: mixed-use apartments with shopping, office buildings, townhouses, a community and library, and an expanded Kaneff Park.

Working with SvN Architects + Planners and Quadrangle, the site will include 4,880 new residences mostly in apartment blocks (city planning documents tend not to indicate whether these will be rental or owner-occupied). The low-density neighbourhoods north of Charolais will be buffered from the denser part of the site with 11 clusters of townhouse units.

Aside from the townhouses, the rest of the development will be distributed between 23 buildings ranging from three to 28 storeys in height. Taller development will be pushed towards the south and west sides of the site, with green roofs on the podiums of building edged on Steeles Avenue and Main Street.

Rio-Can plans for 80,216 square metres of commercial space on-site in the form of retail and office space. This is an increase from the existing shopping mall and standalone stores from 63,829 square metres.

A new community centre, including a potential new Brampton Library branch, has been set aside in the plan, bordering an expanded Kaneff Park. Residents and visitors would be encouraged to use bicycles and walk around with a series of private walkways and public spaces, as well as two new cycling corridors.

The existing Brampton Gateway Terminal will be retained and will be used as a partial grand gateway into the development, as well as the soon to be under construction Hurontario LRT. Nearly all of the existing parking would be moved underground, in giant 3-4 storey parking garage with 6,061 spaces underneath the buildings and new private roads. This is almost double the amount of parking that currently exists.

Four new public roads, two north-south and two east-west, will snake through the site, joined with eight private roads and laneways. Two of the roads, a western extension of Bartley Bull and a new north-south connection between Mill Street South and Lancashire Lane, will have some sort of protected cycling lanes.

No indication has been made for how much accessible parking will be available and if there will be bicycle parking.

Development will be in phases in order to accommodate both the extended leases on retailers in the mall as well as market needs. The first phase will be along the western edge of the site, near the old bus terminal.

Read the full documents, including all of the studies, at the City of Brampton website.

CORRECTION: A previous version of this article suggested that there are two community centres are being proposed for the site, only one is being proposed.