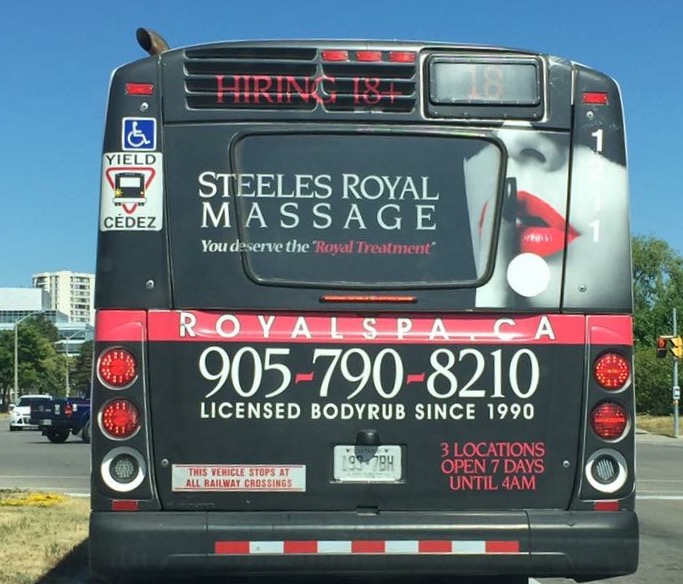 A current Brampton Transit bus advertisement has come under scrutiny by residents due to its risqué nature.

The ad, which is currently running on at least one Brampton Transit route, is for an adult massage parlour located in the Brampton area. It shows a blindfolded woman wearing red lipstick with a finger in her mouth and a tagline that reads, “You deserve the royal treatment.”

The business being advertised, Steeles Royal Massage, is a registered legal business that has been in operation in the city for almost three decades. They offer a range of different types of services for adults, including nude massages and body slides.

The company’s website shows women in varying degrees of undress along with the weight, height and other details of their staff that provide the actual services.

Currently the city’s bus ads are managed and sourced through a third-party company Exclusive Advertising Inc. According to city staff, the ad was approved based on current city advertising policies.

The city has received a barrage of complaints from unhappy residents because of the subject matter of the ad and will be looking to review it more formally.

“The City of Brampton has received several complaints about these ads and is in the process of convening its Advertising Review Panel to take a look at them. This is in accordance with the City’s Advertising on City Property Policy,” revealed a city spokesperson via Twitter.

What do you think about the ad? Let us know in the comments below.