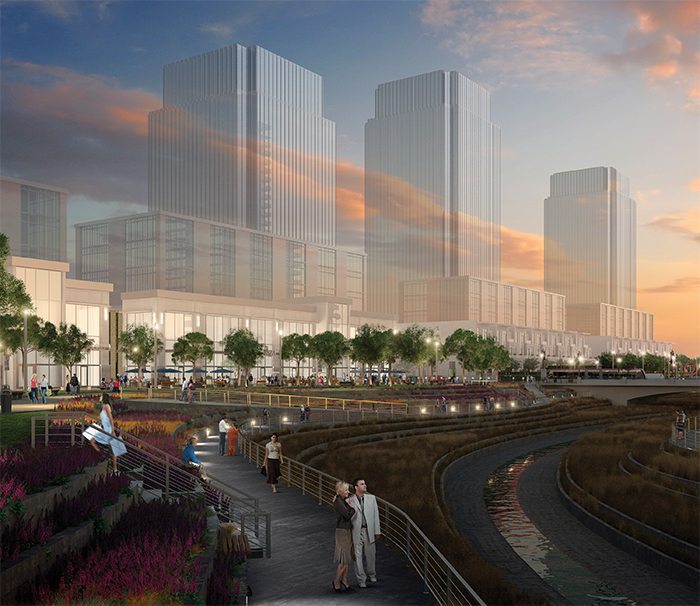 MP Ruby Sahota just announced that the Liberal government will be committing an additional $1.5 million to help Brampton study the options for solving its flooding issues in the downtown core.

The current course of the Etobicoke Creek isn’t the natural one. Downtown Brampton used to flood regularly, and severely, so in 1952 city council approved a project to divert the flow of the creek around downtown — instead of through it — using a rather unsightly, but nonetheless useful, giant concrete channel.

While downtown is relatively safe from flooding, it’s not completely out of the woods. Brampton’s core lies in a floodplain, and while it doesn’t prevent new developments from happening, it forces developers to design their buildings to accommodate potential flood risks. This can be expensive and has often been a deterrent to new developments like condos and up-to-date commercial space.

The current storm channel isn’t foolproof — it could fail in a major storm, and its estimated that most of the downtown could be submerged in 1 to 2 metres of water.

Because of climate change and the potential for bigger storms and heavier rainfalls, the need to build a better way of flood mitigation has become greater in Brampton.

The city and the Toronto Region Conservation Authority (TRCA) have been studying the issue and how to properly handle it since 2011. They have come up with a project called the Riverwalk, which would completely overhaul the channel, improve flood mitigation, and also build a beautiful urban park alongside it.

The total cost to build the project was estimated to be at least $100 million in 2014, though this may go up.

The federal government has already contributed $300,000 towards studies and environmental assessments (EA) and is now contributing an additional $1.5 million through the National Disaster Mitigation Program. The money will help Brampton complete the EAs and decide on what the Riverwalk project will look like.

The project would allow more developers to build in and around downtown without the additional costs, open up new parcels of land and create new recreational spaces and urban plazas along the river.

The final EA for the Riverwalk project started this year. Detailed technical designs starting in 2019 and if all goes well, shovels could be in the ground in 2021 with a project completion by 2025.