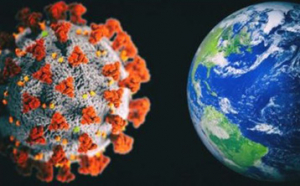 Since the beginning of the 2020 covid-19 lockdowns all across the world, scientists believe that it may have just spared the earth’s climate change a few years.

Due to the COVID-19 lockdowns many of us haven’t been travelling, driving to school, or for that matter, driving at all. Because of this, climate change has come to a halt in a way.

Carbon emissions have been at an all-time low all across the world, like how during the first few months of China’s COVID-19 lockdowns, China produced an estimated 200 million fewer metric tons of carbon dioxide when compared to the same time period in 2019. This alone may have saved an estimated 77,000 lives.

Scientists have also seen an increase in Telecommuting as many of us have been ordered to stay at home which has brought most office employees online with some businesses even considering staying online long term after COVID-19. Due to the increased Telecommuting, scientists have discovered 40% less emissions, 32% less paper, and 20% less energy consumed when compared to a normal office environment.

Although COVID-19 has positively affected climate change, it’s done the opposite for many wild animals. As the economy is crashing many are selling their homes in the city to move to their rural homes in tropical areas. Animals in the tropics have also been experiencing habitat loss as there has been a rise in deforestation, illegal mining, animal poaching and so much more because of the rise in demand for these items. As the guarding of many logging roads and shy rocket prices of different rare stones, people are taking it upon themselves to mine these stones illegally.

After all, only time will tell if the lowered carbon emissions will stay and hopefully add more time to this earth, or if after the pandemic. it will all return to the way it is. One thing I can say is that because of the pandemic many companies are considering staying online in the long term, which will hopefully keep carbon emissions low.

To help emissions low, try walking or biking to places when you are able to. Be mindful of how much waste you are producing and try and buy things that you can in more reusable plastics. Do your part, help save future generations!