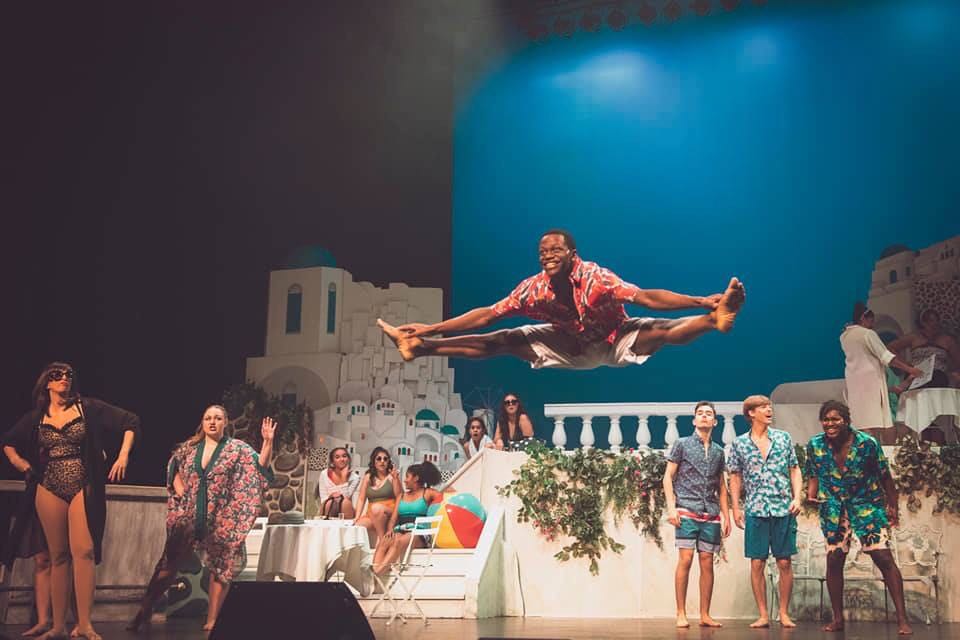 I and millions of people worldwide love Mamma Mia! because of the music – the chart-topping classic 70’s disco music that makes you want to get up and dance. To me Mamma Mia! is essentially a party on stage, with the bonus of a heartfelt plot. Despite a premise which Renee Beiforte described in her director’s note as “silly,” it’s a beautiful examination of a mother-daughter relationship, the role of a father in a family, and personal growth at any age.

Brampton Music Theatre’s production of Mamma Mia! is currently being performed at the Rose Theatre. I checked out the show on opening night and lucky for you there are still a few performances left on Thursday, November 14; Friday, November 15; and closing night on Saturday, November 16.

This production of the jukebox musical is directed by Renee Beiforte, with musical direction by Andrew Ascenzo, and choreography by Stephanie Gemmell. The script for Mamma Mia! was written by Catherine Johnson, and ABBA’s own Benny Andersson and Bjorn Ulvaeus adapted their classic 70’s hits to fit the narrative Johnson created. It was first performed in the West End of London in 1999.

Beiforte is the perfect director for this show thanks to her thorough understanding of, and appreciation for, the material as it is. She does not attempt to make the show anything it’s not. Instead, she brings out the emotional value of the story and supports the enlivening effect of the music on audiences. Her rendition of the show draws inspiration from traditional portrayals, like the 2008 film, and early productions while still finding fresh interpretations that make this version her own.

Beiforte’s production team supports her vision of the show. Stephanie Gemmell’s choreography fills the stage with a celebration of life. Grace Gauvin’s costumes are a dazzling rainbow under Glenn Pringle’s prismatic lights. Austin Ferenczi and his team built a beautiful, dynamic set that looks like it jumped straight off an island paradise, complete with a perspective view of the story’s Greek village that would make a travel blogger blush. Andrew Ascenzo’s orchestra is rich and lively. The live music makes for an essential and incredible focal point around which the rest of the show revolves.

The plot hinges on Sophie Sheridan, a young bride-to-be, played by Emalie Forsyth, who is determined to find her father. After reading one of her mom’s old diaries, she discovers she has three potential fathers and invites them all to her wedding. She tells her bridesmaids all about it during the number “Honey, Honey.” This was one of the strongest numbers and proved to be a favourite of mine, enveloping the audience in the warmth and joy that this show is known for. Immediately, I began grinning in my seat and couldn’t keep my foot from tapping, nor did I want to. Forsyth shines on stage like the sun on the Greek islands, instantly warm and likable.

Another stand-out number from the first act is “Lay All Your Love On Me.” The sensual choreography between Sophie and her fiancee Sky is gorgeous and shows the youthful nature of their love. The number takes a hilarious turn when Sky’s groomsmen join the number galavanting around the stage in flippers. Their ability to do some challenging choreography while wearing flippers is astonishing.

The whole ensemble is energetic and immersed in the world of the play. Which brings me to my favourite number of the first act, which was primarily ensemble: “Voulez-Vous.” It was energetic, creative, dynamic, sexy, and fun. I could tell that a lot of time and effort was put into this song. The staging and choreography were at their best in the whole show during this number. It was the perfect end to the first act.

The second act is when Donna, played by Samantha Ballard, really shines. It is chock-full of emotional scenes between her and Sophie. The connection between Donna and Sophie – or lack thereof – is believable and it hurts to watch them fight, but it makes it even sweeter when they find forgiveness for one another. “Slipping Through My Fingers” is a beautiful ballad that has the potential to be stagnant, but Ballard and Forsyth make this an emotional and heartfelt scene and song. Their chemistry is undeniably poignant. Later, “The Winner Takes It All” is the stand out number of the second act because Ballard’s voice and performance are stellar. Her emotional range in this scene is as wide and deep as the Aegean Sea surrounding the Greek island on which Donna pours out her soul to Sam.

Something’s up even after the final bow

If you can’t get enough of Mamma Mia! then you’re in luck because the show isn’t over after the bows. The cast performs “Mamma Mia,” and “Dancing Queen” again, and finally the curtain is drawn after “Waterloo.” If you find yourself itching to get up and dance during the show, or you want to belt out the songs with the cast, then these three finale numbers are your chance to do so! As I said before, this show is essentially a party on stage, and this rendition makes it a party in the whole theatre when the performers run into the aisles to dance and sing alongside the audience, encouraging us to join in!

This show has been described as the comfort food of theatre because it makes you happy and excited to be alive. I can attest to its power, as before the show I felt tired and a little under the weather, but it only took a few minutes for it to lift my spirits to soaring heights. I left the show singing those classic 70’s hits and I never want to stop. “If you’re feeling down,” “take a chance” on this show because it will certainly make you feel like a “dancing queen.”