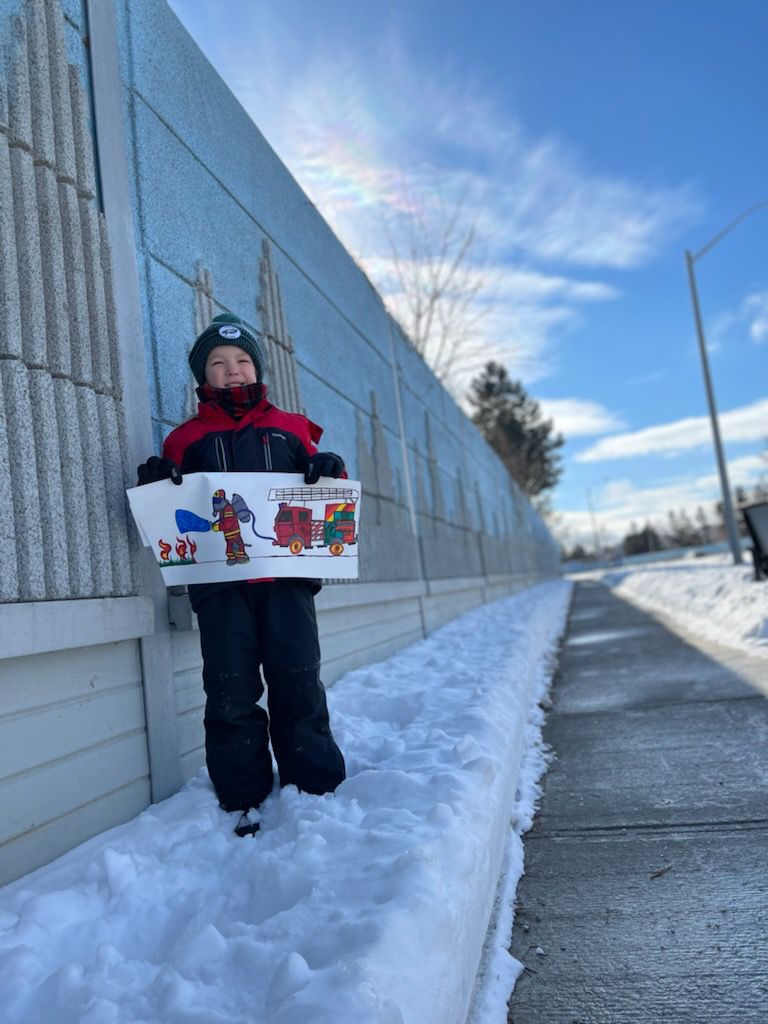 (Photo: Landon, Age 8, Excited about the possibility of having public art displayed on the wall. Offers his own illustration for all to see.)

Last week, City Council was to decide on the fate of the “blue wall” noise barrier along Williams Parkway. However, due to technical difficulties, City Clerk Peter Fay could not play the video presentations from local artists Vijai Kumar and Lisa Stokes.

As a result, the issue was deferred to tomorrow’s Council meeting.

In the interim, based on the reporting of The Bramptonist, there has been significant community reaction in regards to the disposition of the blue wall.

A number of readers explained that the noise barrier is a better solution than seeing broken fences and dilapidated backyards filled with junk. Writes Dee Bieniawski, “While the wall isn’t pretty it’s better than seeing all the broken, fallen fences homeowners don’t bother to fix, or the messy, junky backyards they expose”. Rob Sand agreed, he responded, “I thought I was the only one lol. Most of the backyards were dilapidated with broken fences and weed filled yards.” Louis Lavoie echoes, “Have you seen the condition of other fences along major streets. This is a big improvement.”

The most common word to describe the wall was “ugly”. According to Laila Zarrabi Yan, “They chopped down a bunch of trees to put up an ugly wall that ‘resembles’ mountains. It’s an eyesore.”

Landon is an 8-year old Bramptonian who lives in the neighbourhood. He proudly holds a picture of his rendition of what the wall could display. His mother Danielle sys, “It’s great to see things like this happening in our city. Public art projects like this can really encourage young people into the arts and culture scene, especially if there is a possibility to include their ideas, creativity and art as part of this public art transformation. We pass by this wall daily and think this is a fantastic opportunity to bring life and community engagement to a wall, which is otherwise seen as just an eyesore that no one wants to look at.”

John Cutruzzola, is a long-time supporter of local art programs and owner of Inzola Construction, one of Brampton’s largest private property owners. When asked about the wall, he responds, “As an artist, as a citizen and a member of the New Brampton Organization, I agree that this wall in question in a disgrace.” He continues, “Brampton is in urgent need of such an image change.  The status quo is a way to disaster.  Due to our poor image, we are losing billions of dollars in investment, good jobs, value of its assets and most of all, we are losing our pride as citizens.”

“Our best and brightest of our youth are leaving our city at the benefit of other communities, we hope this project is the beginning of a turn-around and we continue to do so until we bring pride to ourselves.  Beautification is a necessity and is not a luxury.”

Local artist Pam Lostracco agrees. Her recent public art mural at Fire Station 211 has created positive community buzz. “We’re starting to see more public art – on buildings, roads, construction hoarding – and the value it brings to a community. Art does paint a pretty picture but it also captures an audience, creates discussion and stimulates imagination.” Pam explains, “Colours brighten up urban neighbourhoods. Imagery tells a story. Stories engage people to each other of all ages and cultures. I love painting murals because of the feeling I get from making big improvements by transforming blank walls into exciting spaces.”

There was no public consultation when the previous term of Council approved the noise barrier along Williams Parkway. Since then, many complaints have been received by City Hall. Council has since received a staff report providing options on how to move forward. The options were developed after conducting an on-line public feedback survey.

Of the respondents, 31% suggested that trees be planted to cover the wall’s appearance, and, feature local art near intersections. About 28% of respondents requested that the wall be left alone, enjoying the status quo and spending no money. Another 26% voted to have the walls re-stained to a two-tone grey.

Councillor Rowena Santos, a member of Brampton’s Arts Culture and Creative Industry Development Agency (ACCIDA) recommends the option of trees and art. She states, “This blue concrete is a blank canvas for artists who can turn an ugly duckling of a wall into a beautiful swan”.