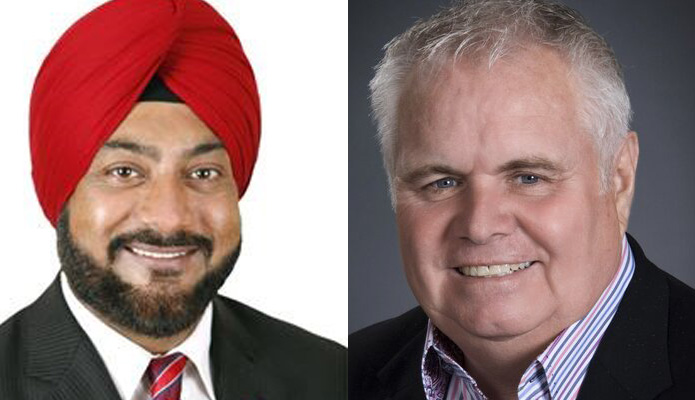 It’s rare, but not unheard of, to see individuals return to politics after a defeat or even after retirement. Two former councillors, John Sanderson and Vicky Dhillon are looking to make a comeback in Brampton politics.

In 2014 Sanderson left his seat as regional councillor in Wards 3/4 to run for mayor. He was defeated by Linda Jeffrey in the mayoral race, and now he’s running against incumbent Martin Medeiros to reclaim his regional council seat in 3/4.

Vicky Dhillon was defeated in 2014 by Gurpreet Dhillon in the race for the city council seat in Wards 9/10. Now that the regional seat in 9/10 has been vacated by John Sprovieri who’s running for mayor, both Dhillons (no known relation) are going head to head once again.

There are a few parallels to be drawn between Sanderson and Vicky Dhillon. For one, both individuals sat on council from 2006 to 2014 and both were present for some of Fennell’s most tumultuous years as mayor.

When the two lost their seats in 2014, Brampton had lost its AAA credit rating, the city’s reserves had plummeted to an all-time low in the past decade, the city had a $239 million deficit and a growing infrastructure gap.

Both Dhillon and Sanderson sat on what was perhaps one of the most contentious and publicized terms in Brampton council’s history. Fennell’s spending scandal came just two years after Dhillon, Sanderson and the rest of council voted to remove oversight of council spending.

Back in 2011 Sanderson and Dhillon, along with the rest of council, voted to remove all third-party oversight on spending their discretionary budgets, moving to an honour system, and eliminating the requirement for the city’s finance department to review their expenses.

The vote laid the groundwork for a massive spending scandal revealed by a Deloitte report in 2014 that showed council had made over $200,000 in transactions that breached the city’s expense policies.

So why have the two come back to the table? Sanderson says that over the past few years people have asked him to run again for his council seat, and Dhillon echoes much the same. Both say that if elected again they want to focus on community safety and crime, gridlock and health care.

The two haven’t shied away from making headlines recently, either. Sanderson has part of a contentious sign battle in ward 3/4. Sanderson, along with the actual incumbent Martin Medeiros, has put up re-election signs. While Sanderson isn’t breaking any rules by positioning himself as the incumbent, Medeiros says its unfair and causing voters unnecessary confusion.

Meanwhile, Dhillon has struggled to answer key questions about his plans for Brampton, including the role he thinks the city should play in the growing tech sectors in nearby Toronto and Waterloo. His 2013 re-election campaign commercial has also made a resurgence, raising quite a few eyebrows.

Back in the 2014 election Brampton council was heavily criticized for its lack of diversity and due to low voter engagement, incumbents were holding seats on council for decades, clinching victory term after term based on name recognition.

But the scandals at city hall encouraged many Bramptonians to vote, some for the first time ever in municipal elections. The engagement resulted in a handful of new faces on council, while some of the old guard were able to hold their seats despite the controversy.

Now three of the councillors that remained after 2014 — Elaine Moore, Grant Gibson and Gael Miles — are retiring. The last, John Sprovieri has launched a bid for mayor but isn’t seen as one of the frontrunners.

Come October 23, Brampton will have a council of virtually all new faces. This crop of candidates is one of the most diverse in age, ethnicity and education the city has ever seen, and it bodes well for the city’s progress moving forward. But will two blasts from the past be able to make their comebacks? We’ll find out on October 22.