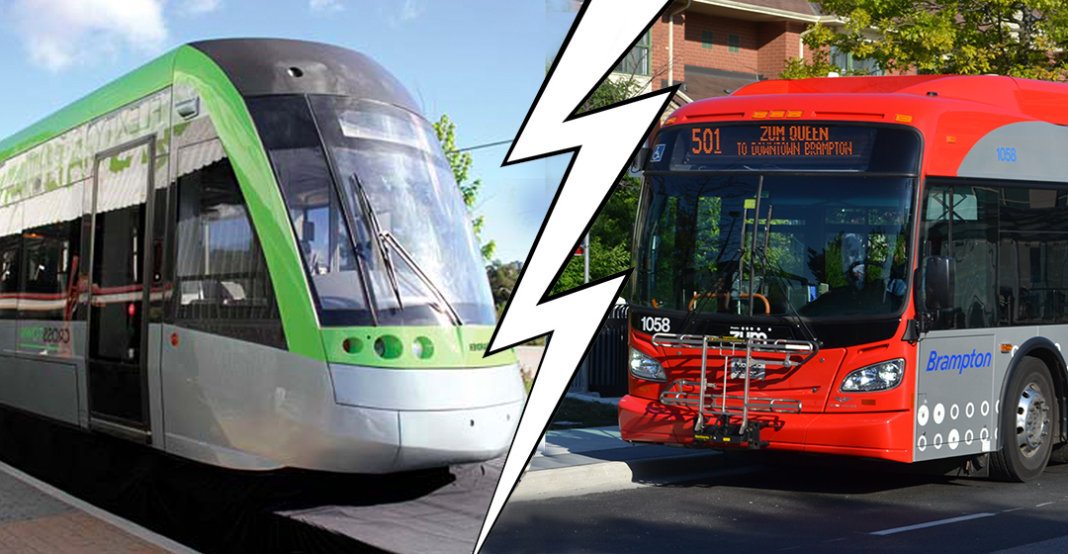 There’s been a lot of controversy on the Hurontario-Main LRT in Brampton. Have you ever stopped to wonder why? Did you know that the idea of running light rail transit in Brampton is idea that is at least 6 years old? Gather round the fire and grab some marshmallows, its story time.

In 2004, 11 years ago, Brampton residents were first introduced to “AcceleRide”. It was a precursor to higher order transit on key east-west and north-south corridors, to be implemented in the short-term. The concept included high frequency branded services on Main Street from downtown to Mississauga, and on Queen Street from Brampton to York Region. These streets were proposed to be designated as transit priority corridors in the City’s Official Plan.

This concept is now implemented in what we know as our ZUM lines.

In 2009, 6 years ago, Light Rail Transit was discussed. It mentioned many points that are still relevant today.

“In the process of widening roadways that are designated as Bus Rapid Transit (BRT), Light Rail Transit (LRT) or other higher order transit corridors, staging opportunities should be investigated to ensure that balance between modes is maintained and long-term strategic objectives around increased transit and active transportation are achieved. Such staging opportunities should also consider transit and road network consistency with adjacent municipalities (Mississauga)”

The 2009 Transportation Master Plan recognizes that Brampton cannot consider its transit strategies in isolation. People move from city to city for different reasons, including to go to work, to shop, or to meet with friends. The Metrolinx LRT project is not a “Mississauga” LRT, any more than Hurontario-Main is Mississauga’s road.

“For corridors designated as BRT / LRT but not identified as requiring widening to six lanes, a four-lane cross section does not preclude operation of BRT / LRT service…Arterial road sections identified as BRT corridors operating alongside four general purpose lane roadways…include…Hurontario Street and Queen Street through the Downtown and Central Areas.”

This “made in Brampton” plan identified the downtown road space as being capable of handling LRT, 6 years ago.

“The implementation of BRT or LRT technology and associated infrastructure should be proactive and accelerated where possible and feasible.”

Metrolinx is providing Brampton with an opportunity to accelerate the implementation of LRT, which is entirely consistent with the Plan.

Transit service intensification, potentially converting some BRT corridors to LRT, is identified in the 2004 TTMP as a long-term or 2031 strategic initiative. Further to that, the overall transit objectives as stated in the Brampton Official Plan support BRT corridors to be operated as LRT corridors in the future. And that, the City should aggressively move towards dedicated transit lanes in centre median right-of-ways and seriously consider LRT technology as transit supportive land uses continue to be implemented, transit ridership grows, and funding becomes available.

The plan recommends that ZUM lines be replaced with LRT ASAP, particularly when funding has become available — which it has!

Here’s a fun fact: According to a Report to the Planning and Infrastructure Services Committee on June 22, 2015,

In Fall of 2009, the City endorsed the Transportation & Transit Master Plan Sustainable Update, which provided support to the 2009 Development Charges By-law Update, and which brought the master plan assumptions into line with the Provincial Growth Plan and with other changes in the provincial and regional planning landscape.

Did you read that? The plan to upgrade ZUM to LRT where merited was approved and carried by Brampton Council in 2009.

You might have noticed that most of returning Councillors from the last election seem to now be against this plan, even though the ridership data shows it’s working — transit trips are increasing. Why the change of heart, especially when the HMLRT plan is perfectly in-line with the 2009 plan they approved? It’s a designated corridor currently operating ZUM; Metrolinx plans prove it’s feasible; and funding is available. Let’s build it!

Why not ask Council these questions? Want to learn how? Check out this article on “Next Steps” for supporting the Hurontario-Main LRT.

You can read the Transportation and Transit Master Plan Final Report − Executive Summary for yourself here: