The “Missing Link,” a key piece of infrastructure that could make it easier for GO Transit to run all-day, two-way GO train service to Brampton is fiercely opposed by neighbouring York Region and its residents, particularly those in Thornhill.

Last summer, Metrolinx announced they had reached an agreement with CN Rail in its quest to build a new freight rail bypass along the 407 corridor. The cost of the new corridor, plus necessary connections and a new third track through York Region, is a combined $5.3 billion in transit spending. 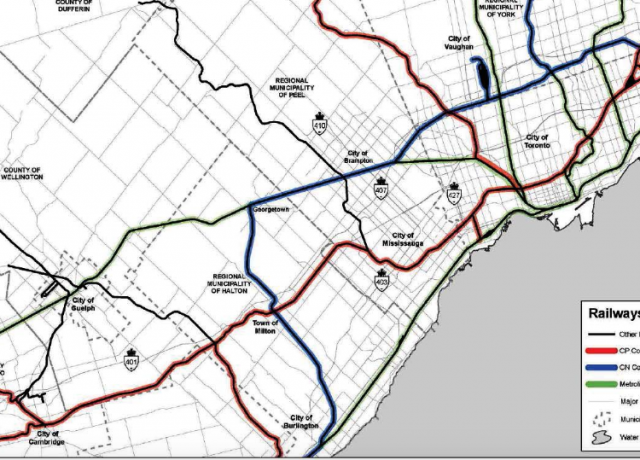 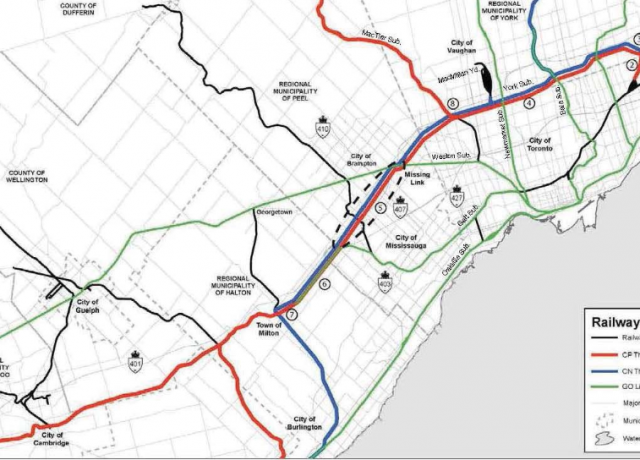 The so-called Missing Link would branch off from the CN corridor in Milton and run alongside the 407 until it reaches the existing CN rail corridor just south of Bramalea GO. The freight bypass would allow for more passenger service without an extensive overhaul of the existing corridor through Brampton.

However, York Region and its residents are concerned about increased freight traffic on the existing CN corridor. It would mean trying to widen that rail corridor by one track to accommodate increased traffic not only from CN trains but also to run CP train traffic along the new and existing corridor in order to provide all-day service on the Milton line.

Residents in Thornhill have brought a 600-signature petition to the attention of York Region’s council in opposition to the plan.

Concerns have been raised about increased noise, vibrations, and the danger posed from increased hazardous and chemical materials transported on trains. Unlike the proposed Missing Link, the existing CN freight corridor through York Region passes closes to the residential areas of Thornhill. However, the freight rail existed earlier than most of the neighbourhoods that now exist.

The group, called “Public Transparency 4 Freight Trains”, would like to make clear that they “have no opposition to the ‘agreement in principal’ with CN Rail and Metrolinx to add all day, two-way Go Train service to Brampton and to the residents along the Kitchener Line. This will not impact York Region communities.”

Their main concerns, according to Co-chair Ricardo Mashregi of the group, is that the CP re-routing proposal is “Milton, Mississauga, Cambridge and Toronto…simply dumping their CP freight into our neighbourhoods.” The statement provided raises concerns over potentially hazardous materials on CP trains.

The Missing Link is a priority for communities along both the Kitchener and Milton corridors, as well as for Metrolinx. The freight bypass is a major transit priority for the City of Brampton, and the city would like to accelerate the project as much as possible, according to a recent report from the Transit Committee of Chairs.

Brampton also has an ally in Mississauga mayor Bonnie Crombie, who was the first municipal politician to give this idea serious consideration. Mississauga, Milton, Cambridge, and Toronto commissioned a joint study proposing the Missing Link initially, and all cities support it.

York Regional Council has made it clear they are in direct opposition to this corridor if it means increased freight traffic, but mainly if it comes from re-routed CP trains.

Residents in York Region have also supposedly gained support from six Liberal and Conservative MPs and MPPs, including Ontario Minister of Transportation Stephen Del Duca in their quest to keep increased freight traffic out of the southernmost part of York Region.