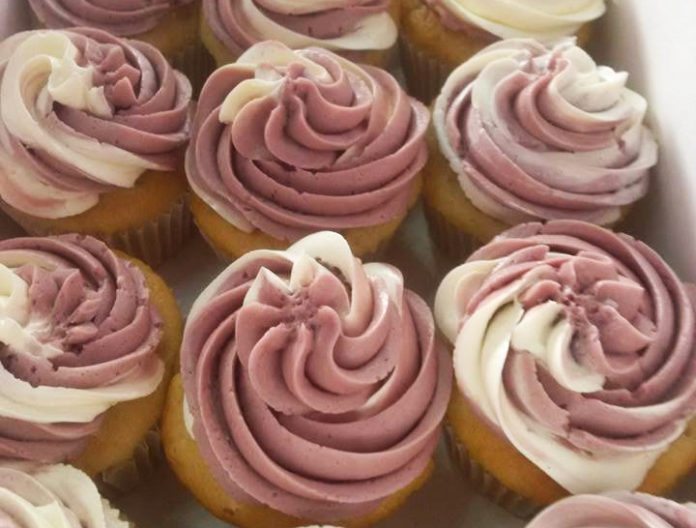 All the yummy tastes of cake and alcohol come together in these amazing cupcakes by Cristina’s Tortina Shop.

Let’s start off by saying, there isn’t any actual alcohol in these cupcakes, but by using different non-alcoholic flavours in the buttercream, Cristina’s Tortina Shop is able to whip up something delicious and unique.

While working on flavours for the new year, fate brought in a customer to the shop with a craving for amaretto. This is where the big idea began.

Cristina’s took a poll to see which were the most popular flavours and voila – the awesome lineup of cupcakes was created.

Out of these five new flavours it’s hard to choose just one. But Mary Iusso, founder of Cristina’s Tortina Shop, says the Sangria cupcake is closest to her heart.

“My dad passed away this past September and he always put peaches and other fruit in his homemade wine. My dad did a lot of work in our shop, he was a carpenter,” says Iusso. “It’s only fitting to have a cupcake in his memory.”

This is not the only connection to family this shop has. Cristina’s Tortina Shop opened three years ago in dedication to her daughter Cristina, who has Down syndrome.

After realizing the world limits Cristina by looking at her capabilities through a very narrow lens, Iusso started her business with the intent to break down these barriers. Currently, she employs people with Down syndrome, autism, and other special needs.

The now thriving business has certainly set itself apart. Cristina’s Tortina Shop has so many different cupcake flavours and the atmosphere is just fantastic. You’ll definitely leave with a smile on your face.

TIP: Call ahead if you’re planning to grab some of these cupcakes. This shop is deliciously popular and the cupcakes can sell out quickly!